Skip to content
Bobby Griffith and his Love of Horses

Bobby Griffith and His Love of Horses

story and photos by Bob Gustin

When you start a conversation with Bob Griffith, it’s hard to tell where it might wind up.

You might start talking about auctioneering school, for instance, and wend your way through Texas saddle makers, New York snowstorms, nuns on golf carts, Willie Nelson, medicine, politics, yard sales, high school sports, NASCAR, boyhood memories, Halloween, truck drivers, fishing, various state fairs, firewood, poker, old rodeo posters, and dogs. He’ll also tell you about negative folks he calls “professional againsters.” In between will be some advice on where to find a good restaurant and some insight on your neighbors.

But always, a constant theme will be his love of horses.
Griffith, 71, runs Bobby G’s Tack and Saddlery at 3872 State Road 135 South in Brown County, but that’s just the latest incarnation of a long and varied career.

He was born in Whiteland, Indiana and grew up on a dairy and beef cattle farm in Johnson County.

“I was always interested in animals. Before I could walk, Dad bought me a pony. He bought my first horse when I was six,” he said. “One time I had 19 of them.

“Horses are just like people. If you treat them right, they’ll treat you right.” 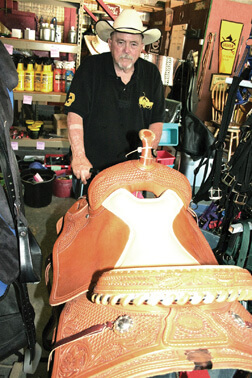 After high school (graduating class, ten boys and three girls), he went to auctioneer school in Kansas, and a cattle school in Missouri. He was a fast-talking smooth-selling auctioneer for a few years, and showed some cattle at state fairs. He did some odd jobs, and spent some time as a horse trainer in New York and Oklahoma. Along the way, he says he did “every job there is” in the horse racing business, from cleaning stalls to being a valet and groom.

“I worked my way up from the bottom,” he said, at racetracks from California to New York.

He met and married his wife Donna in the 1980s, and the two of them worked on opening new apartment complexes in Arizona and elsewhere.

And though he once made thousands of dollars at the horse track (bought a used Cadillac with some of the money), he said he hasn’t placed a bet of more than $50 since then.

“But wherever I was, I sold lots of horse supplies,” he said, including medication for race horses.

Griffith met a Texas saddle maker along the way, and made a business deal with him to produce fancy horse saddles. He treats horses plagued with joint and muscle problems. He once had a small factory turning out horse gear, and produced a liniment of his own recipe called PDQ because that’s how it worked—pretty darn quick.

He returned to Indiana in 1989 when his father was ill, and opened a tack and saddle shop in Greenwood called Griffith’s Wild Horse Junction. And he won some races with a horse named Bandito Buck. He also opened a shop called Trails End in the Story area, and spent part of the 1990s travelling across the state with a mechanical bull similar to the one shown in the Urban Cowboy movie, sponsoring contests and participating in charity events.

He sold the Trails End store in 1994, and began selling tack and saddles from his current location in about 2000.
In the barn next to his house on Indiana 135, you’ll find a sample of his dazzling saddles, along with blankets, lead ropes, and an array of colorful horse equipment. And, of course, the PDQ liniment, which Griffith points out is cool to the skin, not hot. He also sells firewood and ice, and is a drop-off point for trash collection.

PDQ is the result of reading books on veterinary medicine, listening closely to relatives and friends who knew horses, and consulting with a woman who owned an herb farm. He makes the tincture at his Brown County business and sells it all over the country.

A series of health problems put him in a mobility scooter instead of astride a horse in recent years, and his faithful dog Pup keeps an eye on the shop when he and Donna are away. One of the places you might find him is at Churchill Downs in Louisville, Kentucky, or at its nearby museum and restaurant. “There’s lots of history right in our own back yard,” he said.

Why the life-long love of horses? It’s pretty simple. Horses are therapeutic, he said, and make you feel better just by being around them. Bobby G subscribes to the quote which has been attributed to everybody from Winston Churchill to Will Rogers: “The best thing for the inside of a man is the outside of a horse.”