The year 2016 marks parallel Centennial celebrations of the National Park Service and the Indiana State Park System. The Antiquities Act was signed by President Theodore Roosevelt on June 8, 1906. It gave authorization to the President “to declare by public proclamation historic landmarks, historic and prehistoric structures, and other objects of historic or scientific interest” that existed on public lands in the United States. Sites were declared to be National Monuments and were administered by the Departments of Interior, Agriculture, and War. President Woodrow Wilson created the National Park Service on August 25, 1916, with twenty-seven natural areas and nine historical areas. 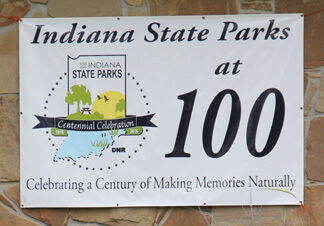 1916 marked the Centennial Celebration of Indiana, and also the establishment of the State Park System at the recommendation of Colonel Richard Lieber, an Indianapolis businessman and German immigrant.

McCormick’s Creek in Owen County was dedicated as the first state park at a July 4th picnic. The second park established was Turkey Run, and both were presented as a Centennial gift to all Hoosiers on December 16, 1916. The state park system now has 32 properties with visitors numbering 16 million each year, with user fees covering approximately 70% of daily operational costs.

In 1915, Mr. Enos Mills, National Parks spokesman credited with initiating the movement to create Rocky Mountain National Park, stopped in Indianapolis and was interviewed by the Indianapolis News. He was quoted on November 17: “The state of Indiana should buy as much of Brown County as possible. It should acquire at least 1,000 acres in the wildest part of the county. The heart of Brown County is purely wild….From the scenic standpoint, Brown County is one of the best spots that ever existed in the great stretch between the Appalachians and the Rocky Mountains.” The largest and most visited Indiana State Park, Brown County State Park opened in 1929.

But it was Lieber himself who envisioned a cabin community to honor Frank McKinney “Kin” Hubbard, the creator of the Abe Martin characters that brought Brown County ways to the country through the Indianapolis News as well as 300 other newspaper outlets. Though Hubbard died in 1930, the lodge in Brown County State Park was named the “Abe Martin Lodge,” and the names of Abe’s neighbors graced the visitors’ cabins.

By 1933 total park acreage was 3,821 acres, and a saddle barn was added to the park’s offerings. Spanning Salt Creek at the north entrance, a covered bridge was added. Originally erected in Putnam County by Henry Wolfe just a hundred years before, the bridge was moved and then reconstructed by the State Highway Department.

Reclaiming the hillsides that were left barren by timbering and erosion, the Civilian Conservation Corps Battalion #1557 began work in June 1934. The CCC planted many of the pine, walnut, spruce, and locust trees. Records show that the steepest areas were planted in about 1,000,000 Scotch, white and red pine, and 21,450 Norway spruce. North of Hohen Point was the camp that housed the personnel of the CCC in several small barracks and a large mess hall. This area was the site of an old village called Kelp that had already ceased to exist. 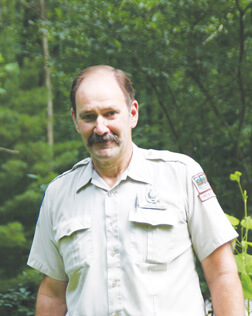 Property Manager of Brown County State Park since 1994, Doug Baird, has been with the park since 1978 when he came as the assistant property manager. He started his career with the Indiana Department of Natural Resources in 1975 as a seasonal employee at Turkey Run State Park while a student at Purdue. When asked, “What is the part of the Park that is special to you?” Baird relied, “The lower shelter is special to me because my wife and I got married there. The covered bridge is special because of its age and its double-barreled uniqueness, and because where it was originally built was not far from where I grew up, and my dad could remember the bridge when he was a young boy. And wherever I find mushrooms becomes a special place to me, but I won’t be more specific than that.” 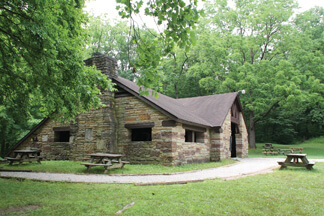 State Park Lower Shelter where the Bairds were married.

Doug and his wife, Teresa, live at the park since houses are provided for the Property Managers and Assistants in Indiana State Parks. It’s a wonderful place for their daughter, Natalie, and son, Ethan to grow up.

Doug has seen a lot of growth in the trees and vegetation in the park over the years. The views from the park’s scenic overlooks have changed as natural progression has gradually taken place. He notes the make-up of the park’s natural environment has been altered, unfortunately, as invasive species of plants and animals have been introduced, much to the detriment of the native flora and fauna. Diversity in visitors themselves mirrors the changing demographics of the general population.

Over the years, Doug has seen major expansions, replacements, and renovations of facilities throughout the park. The Abe Martin Lodge has been expanded and renovated a number of times to include an indoor aquatic center, as well as more guest rooms and cabins. In the early 1980’s, the campgrounds were upgraded and expanded. The Nature Center was enlarged in the mid-‘80s, and is currently receiving upgrades to the public restrooms. The original pool was replaced in 1980. Three small shelter houses have been built and all restrooms have been gutted and rehabbed. Utilities have been upgraded and expanded to meet demands. Trails for mountain biking have been established.

Doug says, “I feel very fortunate to have spent my entire career, and most of my life, in a place as wonderful as Brown County State Park. Over the years I’ve had the pleasure of working with a lot of great people, all of whom have been important to the success and popularity of the park.”

Brown County, along with all Indiana state parks, is marking this 100th birthday with a summer season of “100 Days for 100 Years.” The anniversary will be observed at the Brown County State Park on July 23 with the Centennial Celebration, “Smokey Safety Day, and M.C. Axe and the Fire Crew.”