How far is it from a career in musical theaters from New York City, Los Angeles, and Branson, MIssouri (not to mention 13 other countries and many other states) to a light-filled woodworking shop and studio on Old School House Way?

For Rhett Thomas, his wife and business partner Wendi, and their five (soon-to-be six) children, the opening of their shop as natural as the emergence of a leaf from a twig. Rhett and Wendi married when they were in their very early 20s. “I was a surfer and she was a mountain girl. We met on stage in Illinois and started our careers together. We had individual dreams, but we had a bond from the very beginning. Having children (Aleese, 19; Albany, 17; Olivia, 15; Ilana, 11; Dallin, 7—the only boy; and another girl on the way) only made us stronger.” 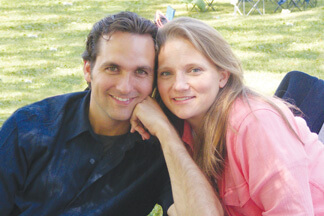 “Our whole life, we’ve been around music. I grew up watching Fred Astaire and Ginger Rogers. My parents were ballroom dancers. They were second to Bobby Burgess in the auditions for the Lawrence Welk Show. My grandmother was a radio singer and actress for MGM studios, and she was a dancer. I started performing with Sandy Duncan, Gavin McCloud, Nannette Fabray—the old school shows. It was a great time.”

Rhett’s brother Rick, an illusionist, is a headliner at the Andy Williams Performing Arts Center in Branson, Missouri. His brother Ross, with whom he performed for years as The Thomas Brothers, is still touring as a solo musical act.

The Thomas Brothers ended up headlining at a theater in Branson where The Osmonds were also headlining. “They were looking for guys to join their group and travel with them. We performed alongside the group…but not exactly part of the group. We did that for a few years.”

As his life on the road became more and more centered in Branson, Rhett started carving seriously while working part-time in a shop owned by his mentor, nationally-known master woodcarver Peter Engler, who died in 2013. “I just fell in love with carving.” 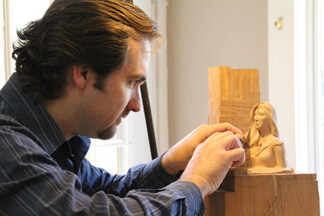 “I was on the road for years, traveling four to five months out of the year. I wanted to stop doing that. We started searching for places to live. While it was a fun life, it was also a lot of work. We lived in nine different states before we moved here. We felt like gypsies.”

There comes a time when you need to find home, Rhett adds. Every time they visited Wendi’s sister, who lives in Columbus, Indiana, they came to Nashville. “Three years ago, we felt like we fit. It’s artsy, it has music, and there’s some future here that I’m excited for. I think having the shop has really grounded us. We’re going to make it work.”

Rhett carves in the shop every day it is open. He is now at work on “Queen Esther,” and has recently finished “Balance,” which rises from a smooth stone base. The finely carved face is filled with bliss as she reaches skyward. Each finger is finely articulated as though Thomas’s medium were porcelain or bronze rather than wood.

Even though he is committed to carving, he is not abandoning show business. He’s already collaborated with the Brown County Playhouse in facilitating Jimmy and Jay Osmond’s Moon River and Me tribute to Andy Williams which will be at the Playhouse August 10, 2016. And he will also perform in this year’s Christmas show.

Although Rhett is the out-front presence, the shop is a family endeavor. His wife Wendi is his business partner and all of his five children had a hand in creating the shop space. It was his daughter that noticed the site of their current shop was empty on one of their visits to Nashville.

All the items in the shop, representing 42 artists and craftspeople, are made in the USA, mostly from artists within an eight to ten hour radius from Nashville.

“We don’t import and we like to keep it handcrafted. We think it’s important that the art continues. That’s one reason I love Nashville. The art continues here.” Rhett lists the items they have in stock: everything from wooden housewares, to pottery, to carvings, to painting, decorative items, and sculptures. Even now there are Christmas trees filled with ornaments and Halloween designs. “We try to keep it fun.”

The Thomas Treehouse is located at 173 Old School Way, in Nashville. You can contact them through Facebook or call (812) 720-7077. <thethomastreehouse.com> is under construction.