story and photos by Paige Langenderfer

A new business in Nashville has joined the popular Farm to Table movement, offering shrimp so fresh they might still be alive by the time you get them home
.
Roger Kelso and Brenda Young opened the doors of Salt Creek Shrimp Company on February 5, 2016 and sold out of their first batch of shrimp in less than two hours.

The idea started about a year ago, when Kelso made the decision to open a business in his hometown of Nashville. Kelso, who has always been intrigued by aquaculture, agriculture, and locally owned businesses, settled on shrimp farming after a great deal of research.

“I learned that shrimp is the number one seafood in the country. Ninety percent of our shrimp comes from Asia, which means it is far from fresh,” he said. “With the Farm to Table movement soaring in popularity, I thought this was a great time to offer high quality, fresh, locally raised shrimp.”

Brown County’s tourism industry also made the decision a no-brainer. 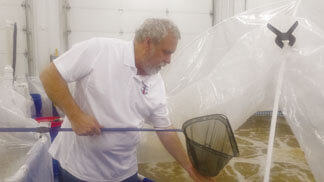 “More than 2.5 million cars drive by our doors every year,” he said. “The market is definitely here, and in the tri-state, for fresh shrimp. We have already gotten excellent responses from Bloomington, Indianapolis, and Columbus.”

Salt Creek Shrimp Company, located in Gnaw Bone near Brown County Winery and Bear Wallow Distillery, started with a handful of shrimp in a tank in Kelso’s garage.

“I wanted to make sure I could do this and that it was something I would enjoy,” Kelso said.

Young said those first shrimp hold a special place in their hearts.

“They all have names. Frank the Tank is our favorite,” she said. “Those guys are pets. They will never be eaten.”
Expanding the operation from a single tank in his garage to tanks large enough to hold 30,000 shrimp was no simple task.

Kelso said his background as an environmental engineer has proved beneficial. He has worked around water and water systems since he was 17. The past five years he’s been traveling to the Middle East to design infrastructure systems, recently designing a filtration system for a large dolphin habitat in Egypt.

“He designed everything in this operation,” Young said. “It’s been really interesting watching him build this.”
Each of the eight tanks is fitted with advanced recirculation, filtration, and temperature control systems. The salt water, the same salt water used in large aquariums throughout the country, is filtered and reused from harvest to harvest.

Kelso examines each tank several times a day to regulate everything from oxygen levels to waste. The shrimp eat food that is served up at large-scale aquariums around the country. He even makes sure that the lighting is soothing and that the right music plays in the background.

“We do everything we can to make sure that the animals feel as close to their natural environment as possible. It’s important to keep them calm and happy,” Kelso said. “Salt water is hard. There are seven parameters that must be measured daily to ensure that the water is fit enough to keep the animals healthy. There is a lot of work to this. It is not simple.”

Because of his vigilant care, the shrimp require no antibiotics, steroids, or pesticides.

“Consumers are increasingly demanding more sustainability and food transparency,” Young said. “We take great pride in the sustainable and healthy way we raise these shrimp.”

Approximately 30,000 new young Pacific White shrimp arrive at the farm every 28 days, shipped from the Florida Keys. They start out about the size of an eyelash. After four months of nurturing, they are ready to sell and have grown strong enough to jump up to three feet in the air.
“They have 10 little legs and they use all of them to jump,” Kelso said. “We have to be careful to make sure they don’t jump out of the tanks.”

The company’s first sale was on February 5, and they sold the entire tank of shrimp, for $18 per pound, in an hour and a half. Kelso, Young, and children Heather Deckard and Heath Young, worked at a blistering pace to fill the orders.

“As people told us what they wanted, the others would be in the back fishing out the shrimp with a net,” Brenda said. “It was really exciting. People were so excited about getting fresh shrimp. They were so fresh that their legs were still kicking when they went out the door.”

The first sale was similar to a soft opening and showed them that there are still a few bugs to work out, Brenda said.

“After we sold out, we had a family meeting and it was apparent that we have to keep doing this and get bigger,” she said.

Kelso had been thinking bigger from the beginning, and is already working with a realtor to find a larger space.
“We want to sell more shrimp, but we also want to become somewhat of an educational site,” he said. “We would like to have tours and a classroom-type setting.”

Kelso also said he is also open to the idea of offering more than shrimp.

“I would like it to be a seafood center,” he said. “I want this to be a sustainable operation and a valuable asset to the community.”

For more information visit their website <www.saltcreekshrimp.com> or their Facebook page “Salt Creek Shrimp Company.” The address is 4752 Old Indiana 46 and the phone number is (812) 720-3065.