Skip to content
The Rebirth of the Brown County Inn

The Rebirth of the Brown County Inn

Twenty years ago, when Courtney Gosser was spending idyllic summers at Brown County’s Camp Palawopec, she never guessed that she would one day be leading one of Nashville’s most well-known hotels through a process of renovation and rebirth.

The Brown County Inn has reopened after closing the entire month of January for the first phase of a complete makeover.

“The layout of the building is staying the same, and we’re trying to keep the same feeling, but we’re pretty much touching every room,” said Gosser. 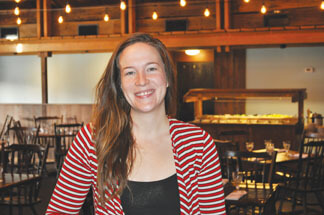 “We’re replacing all the carpets. The Town Hall space is getting gutted, repainted, and carpeted. All the rooms are being re-done. We’re taking out all the old furniture and getting new furniture.”

During the shutdown, the pool was drained and totally refurbished. Extensive changes were made in the kitchen.
The rooms’ wood paneling is being repurposed as headboards in the guest rooms and around the hotel on the salad bar and as partitions in the dining room.
“That wood paneling helped create that rustic, Brown County feel,” said Gosser. “We still want that, but we want it to be a little more modernized. There’s stuff that is staying, but is just being re-purposed and re-imagined.”
Also being reimagined is the menu in the Harvest Dining Room. There won’t be wholesale change, but a push toward fresher, more locally sourced ingredients.

“We’re not completely changing the style of food we’re serving, but we are changing the quality of everything we make,” Gosser said. “So now, for instance, we’re hand-cutting all of our fries, we’re making a lot of our own dressings, and we’ve extended the salad bar.

“Fried chicken—we can never change that because we’d get too much of a pushback, but we switched the chicken to Miller Farms, which is an Amish farm here in Indiana.”
The Harvest Room’s burgers, steaks, and pork products are from family-owned Fischer Farms, where animals are raised without hormones or antibiotics. The poultry served is also drug-free and vegetable-fed.

Sausages will be from Smoking Goose, an Indianapolis meat locker that handcrafts slow cured and smoked meats from healthy animals raised on small family farms in Indiana.

The new menu will also include some references to the Gosser’s Wisconsin roots—the “Wisco burger” and, of course, deep fried cheese curds.

Weekend breakfasts will include something new—crepes—maybe some with Nutella and banana or perhaps one with ham and spinach and an egg on top.
It’s all a work in progress.

“We’re still trying to figure out how to be unique, but still be American cuisine,” she said.

Gosser said the changes have met with approval from most patrons.

“We’ve had such good feedback—really good,” Gosser said. “I think the locals are really interested in food like this.”

Although the kitchen and menu are being transformed along with the facility, one important thing that will not be changing is the staff.

“I think the staff was very nervous about new owners,” she said, “and I think we’ve won them over, and that has been a blessing to us.”

The hotel employs about 50 to 60 people, she said.
“They know all the nuances, where the breaker boxes are, procedures, the way certain things are done, all that,” she said. “Because it’s such an old building, it has many quirks.”

“Our staff is like a little family,” she said.
Most of the key staff has remained, including Danielle Melton at the front desk, Mary Curtin in the dining room, and Tom Craciunoiu, the previous general manager who has worked at the BCI since he was a teenager.

“He’s worked here most of his career,” Gosser said. “He was doing everything that the four of us are doing now.”

She said Curtin has also been a key player.

“What would we do without her? She’s just so professional and she’s been here doing this for nine or ten years,” Gosser said.

“So we got to keep all three of them and most of the staff, who truly run the show,” she said. “This is like their building—it’s their house.”

It was Courtney’s parents, Barry and Deborah Herring, who heard that the familiar Nashville landmark was for sale and forwarded the idea of taking it on as a family venture.

“They were really looking to retire, but they had always thought about owning a hotel, and had always wanted some kind of family legacy project,” Gosser said.

The Gossers moved here from Madision, Wisconsin with food service experience. Husband Dietrich has a background as a line cook, butcher, and cheese monger. Courtney had managed a restaurant before pursuing an accounting career.

He will run the kitchen while she handles the ordering, banquets, staff management, scheduling and all the other details of running a bar and restaurant.

The kitchen has been totally refurbished, with a lot of new equipment installed.

“We’ve created more space back there,” Gosser said.
One of the tennis courts was turned into a walk-in garden with raised flower beds with raspberries, blueberries, and herbs which “wintered okay.”

“We want our guests to be able to walk in it and eat a raspberry if they want,” she said.

“One of the first things we did was plant a bunch of tomatoes out front and we served those tomatoes to our customers,” she said. “We can’t get everything from it, but, anything we can use, we will.”

“We have had good responses and everybody has been really, really nice to us.”

“Some people miss the old antiques, and it wasn’t that we didn’t like the antiques, it’s just that we needed to look different to be considered or thought about in a different way,” she said.

“But I think even the people who miss the old look truly do love us and will stand by us and give us a chance.”

The Brown County Inn is located at the intersection of State Roads 135 and 46 in Nashville. You can make reservations by calling (812) 988-2291 or visiting their website <www.browncountyinn.com>.
Lookup their Facebook page “Brown County Inn.”