I am terrible at remembering anniversaries—I’m a man. But this year is special. June, 2016 marks the occasion of the 50th annual Bill Monroe Bean Blossom Bluegrass Festival. That makes the Bean Blossom festival the oldest continuously running Bluegrass music festival in the world and earns it a “don’t miss” status on my calendar.

Mr. Bill Monroe, the father of Bluegrass music, purchased the Brown County Jamboree music park back in 1952 and booked country music acts in the big old Jamboree barn that used to sit about where the Museum is located. Mr. Bill and the Bluegrass Boys played at the park several times a year and other Bluegrass oriented bands played there. Many of the Grand Ole Opry stars of the 1950s would stop by when they were touring. A weekly square dance was held in the barn for many years. The first official Bluegrass festival was held in 1967.

That first festival was a puny affair compared to the one coming up in June. It wasn’t even called a festival. Monroe advertised it as a “Big Blue Grass Celebration”. It lasted two days and boasted five named bands. By comparison, the 2016 festival goes on for eight whole days, from June 11 through June 18, with more than sixty-five top-notch Bluegrass acts.

This year’s line-up include a cadre of folks who have been in the business for more than fifty years like the Del McCoury Band (Del was a Bluegrass Boy back around 1960), Jesse McReynolds (of Jim and Jesse fame) and the Virginia Boys, the Dry Branch Fire Squad, Bobby Osborne and Rocky Top Express, and a lot more.

Top acts such as the Grascals, James King, Dailey and Vincent, The Nashville Bluegrass Band, David Davis and the Warrior River Boys will perform. About every Bluegrass band worth their salt will be there for this historic occasion.

You will hear everything from traditional, old-time Bluegrass to “Newgrass” and Bluegrass Gospel all served up with consummate musicianship. 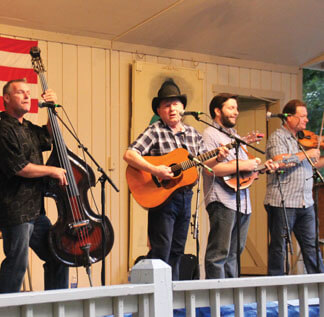 Ronnie Reno and the Reno Tradition

And if you are a musician there are workshops for the banjo, guitar, mandolin, bass, fiddle, and harmony singing taught by festival headliners. Once, I even attended a session on how to work around one microphone like the old traditional bands. It’s certainly not hard to find other folks to jam with in the parking lot or camp sites. So don’t forget to bring your own “axe” with you.

Talking with the stars and band members up at the shelter house after they perform is a festival tradition. In most areas of the show business world there is a wall of separation between the audience and the performers—but not in Bluegrass. I have always found the performers to be friendly, happy to provide autographs, and even helpful.

I was taping some interviews with various folks one time at the festival when a pretty good storm suddenly blew in. I needed to get back to my truck to get some garbage bags to protect my recorder and laptop but I didn’t want to leave them alone at the shelter. I wasn’t sure what I was gonna do when a couple of members of a Grammy-award winning band offered to baby sit my equipment for me.

A big difference between the first “celebration” and this year’s festival is the park itself. Primitive is the first word that comes to mind when I think back to the early days. The old barn was torn down back in 1986 and replaced with the “Bill Monroe Bluegrass Hall of Fame and Museum” in 1992. The outdoor stage has been rebuilt and refurbished but the original “Back Home Again in Indiana” sign is still in its place above the stage. I am happy to report that the sanitary facilities have also been suitably updated.

The park can handle camping for everything from the biggest land yacht to a pup tent. There are RV sites with 30 and 50 amp electrical hook-ups and over 300 water hook-ups. You can also rent one of the thirteen log cabins.
Camping at Bean Blossom is like moving into one of the friendliest neighborhoods you can imagine. You all have an appreciation for music that brings you together.

You don’t have to take time away from enjoying the shows to cook lunch or supper. There is an amazing array of food vendors ready to satisfy whatever you might have a yen for. I highly recommend the walleye sandwich, the pulled pork barbeque, fried green tomatoes, the tenderloin—oh heck, it’s all good.

You can’t go wrong spending the week or just a day or two at the 50th Annual Bill Monroe bean Blossom Bluegrass festival. Tickets can be purchased by the day, 3-day combo, and for the whole week with discounts for early purchases. Camping is extra.