For those who may not know or cannot remember, John was an idiosyncratic, Grammy-award winning, multi-instrumentalist, Old-timey, bluegrass singing, songwriter and steamboat pilot. He performed in the Coen brothers hit movie O Brother, Where Art Thou and in the “Down from the Mountain” concert the movie spawned. He also provided narration and music for Ken Burns Civil War series.

John got his start playing banjo and fiddle in folk and bluegrass groups while still in high school. In 1965 he moved to Nashville, Tennessee and worked as a Disc Jockey and session musician and wrote songs in his spare time. He got a recording contract with RCA and produced a couple of albums, the second of which contained a song called “Gentle On My Mind.” That song won four Grammy awards and, as John said, “bought him his freedom.”

In 1968 he moved out to Los Angeles where he played on the seminal Byrds’ album “Sweetheart of the Rodeo,” was a writer and guest on the Smothers Brothers Comedy Hour and appeared on the Glen Campbell Goodtime Hour. Commercial success was not what John was looking for and by 1970 he had earned his riverboat pilots license. Still, he did not abandon music. 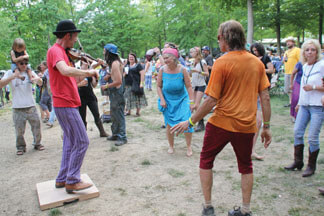 1971 saw the release of his album “Aereo-Plain” that John recorded with Norman Blake, Vassar Clements, Randy Scruggs, and Tut Taylor. That same year Hartford brought that band to Bean Blossom. “Aereo-Plain” was a game changer. Mandolin master Sam Bush said that without it there would be no Newgrass music. It was the catalyst for a new generation of acoustic musicians to explore and stretch the boundaries of folk music and to breathe new life into Bluegrass.

John continued his musical experiments with people like Doug and Rodney Dillard, Sam Bush, Marty Stuart, and Jerry Douglas. He went on to develop a solo act in which he sang, accompanied himself switching between banjo and fiddle and keeping time by shuffling his feet and clogging on a piece of amplified plywood.

In the 1990s he changed things up again, touring with his son Jamie and performing with the Hartford Stringband consisting of Bob Carlin, Mike Compton, Larry Perkins, Chris Sharp, and Mark Schatz. With this band he recorded an album called “Good Old Boys” which features a moving, ten and a half minute ode to Bill Monroe, “The Cross-eyed Child.” John and Bill were good friends right up to Bill’s passing in 1996.

John was diagnosed with Non-Hodgkin’s Lymphoma in the late 1980s but he continued to work at his song writing and performances. Even as his condition worsened he recorded several albums of fiddle music and co-authored a biography of blind fiddler, Ed Haley. John left this world fifteen years ago on June 4, 2001. He was 63.

So, here we are, 45 years after John Hartford first graced the stage at Bean Blossom ready to, once again, honor his achievements in music and life with a festival. This year’s line-up is honorable as well, with: Sam Bush, Leftover Salmon, the Travelin’ McCourys, the Dillards, Danny Barnes (co-founder of the Bad Livers), Brown County’s the Whipstitch Sallies and the “White Lightning Boys” along with more than thirty other great acts. It’s gonna be a three day celebration of acoustic music, from bluegrass to newgrass and country, to good old American folk music.

Tickets can be purchased by the day or for the three days and there are discounts for purchasing them in advance. For more information and tickets go to <johnhartfordmemfest.com>. Camping rates are extra and can also be arranged through the website.

So come on out for what will surely become the “goodle days” in the “back roads of your memory.” I hope to see you there.