The new Arrow Tag archery games at eXplore Brown County are hitting the mark with adventurists age 8 to 80.
Never heard of it?

That’s because eXplore Brown County owner Gary Bartels is copyrighting the term and just launched the games this spring.

“I’m just having a good time learning where it’s going to take us,” Bartels said with a laugh. “It’s definitely already catching on among our visitors who want to try something outdoors that’s new and different.”

The idea began when Bartels discovered indoor Archery Tag with his grandson in Las Vegas. The lifelong archer said the game was a fun progression in difficulty from a game like laser tag, but the arrows didn’t shoot very far and left much to be desired. Then he stumbled upon a German-made system of bows and rubber-tipped, shatter-proof arrows that have become popular in Europe among live action role-playing enthusiasts. 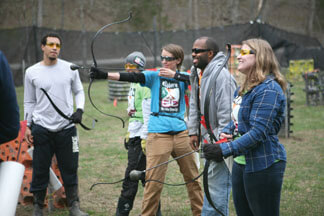 He ordered some sets and let his imagination run wild.
Bartels’ Arrow Tag games combine the best aspects of dodge ball, paintball, and laser tag, while also teaching survival skills and how to string and shoot a bow. After a training session players participate in games ranging from a light-hearted round of Bottoms Up, in which one’s opponent’s buttocks is the target, to a fast-paced mock survival scramble modeled after the “Hunger Games” movies. Over the course of an hour, players experience a great cardio workout without the bruises of paintball, Bartels said.

Clinton, Indiana residents Donnetta and Mike Polomski visited eXplore Brown County with their grandsons during spring break and said the games were right on target for everyone in their group, which ranged in age from 5 to 51. “They had a blast,” Donnetta said. “The boys got in the car and were already planning their next trip back. Henry, the 5-year-old, said it was his best day ever!” 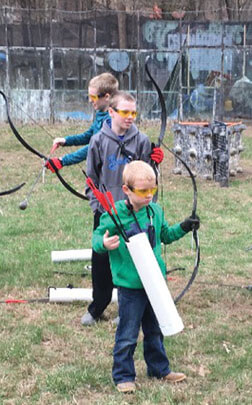 5-year-old Henry Stateler, right, and his brothers, from left, Kaleb and Isaac Fortner enjoyed some Arrow Tag games during a family vacation.

Bartels said the games are great confidence-builders; he’s even marketing them for corporate team building. “Folks come into Arrow Tag not quite sure what they’re doing, but nobody gives up. They just try to shoot better, run faster, and it’s great to see their improvement just from the beginning to the end of one game.”

The 65-year-old Bartels grew up in an era when cowboys and Indians dominated television sets across America, and children’s outdoor play centered around those themes. “A bow was more fun than a cap gun,” said the Ohio native. By age 12, he and his friends routinely trekked to the town dump with their bows and arrows to shoot tin cans. But these days, many parents struggle to wrestle their children away from electronic devices and into the outdoors at all. One of Bartels’ goals at eXplore Brown County is to get people, “off the couch and away from their screens.” Recent movies like The Hunger Games and Avatar are helping inspire a resurgence of interest in archery, he said.

Bartels hopes to be part of that trend. But more than anything, he’s just excited to get to play with bows and arrows again on a daily basis. “Technically, during games I’m the ref, but I really can’t keep myself from playing,” he said laughing. “It’s fun to watch folks who say they just want to watch but quickly have to join in.”

Arrow Tag is offered twice daily at eXplore Brown County on the days they are open. Glow-in-the-dark arrows also are available for night games. The facility can accommodate groups of up to around 20, or up to around 40 if players rotate on and off the field. A one-hour game costs $25 per person. Call for availability.