Now 75 years old, Bill Pool still laces up his boots every morning and makes the five-mile trip from home to the Helmsburg Sawmill, which he has owned since 1973.
But he hasn’t put in a single day of work in those 43 years. At least, that’s the way he sees it. 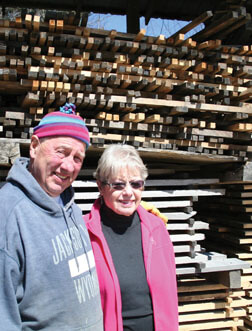 “I love what I do. I haven’t worked a day since I bought the mill,” he said. Most days, you’ll find Bill at the sawmill by 7:30 a.m. or earlier, cutting, planing and stacking wood, operating heavy equipment, helping customers and generally taking care of business. Such a schedule would easily wear out even younger men, but while he admits it isn’t play, he refuses to call it work. It’s more like his calling, and he says he’ll retire when he can no longer lace up those boots.

Bill can tell what type of wood he’s dealing with by its smell. He can judge its thickness by feel, and he can figure complicated board feet pricing in his head. He’s right where he wants to be, running a family business with his wife, two sons, daughter, and grandson involved.

Born in Iowa, Bill moved with his family to Brown County in 1956, graduated from Brown County High School and took a shot at college before joining the Air Force as a medic. He was stationed in Scotland when he decided to check out a square dance in 1963, where he met a young woman named Susan. They fell in love and married the next year. The couple moved to Brown County in 1965, bought land north of Bean Blossom, and began raising a family—along with a Christmas tree farm.

There has been a sawmill of one sort or another in Helmsburg since the early 1900s. Bill was working at the Chrysler plant in Indianapolis when Charlie Richards decided to sell the sawmill at 2230 State Road 45. All Bill knew about wood at that point was how to cut firewood. But he was a quick learner, and Richards stayed around for a few years to show him the ropes.

Along the way his children, Willie, Kevin, and Melanie, grew up at the sawmill and naturally became a part of the business. Ian, Kevin’s son, has also begun work at the mill. Bill and Susan turned over the business to the two sons about three years ago.

Lots has changed since the Pools took over the sawmill. In 1973, Bill says, some of their major customers were “hippies” from the Needmore area, and area farmers. In recent years, over-the-counter sales have tripled, and builders come from a wide area to get the air-dried poplar.

Here’s the secret to his success: Treat customers fairly and give them a product they want, and dividends are paid via word-of-mouth advertising and repeat business, he said. And a presence on the Internet, overseen by daughter Melanie, has brought another set of changes.
The Pools buy timber from landowners, and carefully cut and manage woods from Terre Haute to Rising Sun. They harvest the trees, haul it to Helmsburg, process it, and take pride in seeing the final product.

It’s a no-waste business. The cut lumber builds everything from cabins to fine furniture, while the sawdust goes to horse farmers, bark mulch goes to flower growers, other mulch is sometimes dyed and commercially sold, and the tops of trees become firewood.

Some of the wood goes to make veneer, and the Pools offer hickory, walnut, white and red oak, hard maple, cherry, ash, beech, sycamore, and poplar. Tall stacks of carefully arranged boards air-dry under big buildings atop a hill near the sawmill office. Most of the time, a huge assortment of lengths and widths are available.

“If you have something, you can sell it,” Bill said. “If you don’t have it, you have to go get it. So it pays to have a fair amount of stock. It gives you options.”

Among those options are lumber packages for log homes. You bring the building plans, Helmsburg Sawmill provides the lumber. The mill also sells grade lumber, cross ties, lumber for pallets, and byproducts like the mulch, sawdust, and firewood.

That’s part of what has kept the Pools in business for nearly half a century.

For Bill, it’s pretty simple: “I like making boards.”