Enchantment is afoot in Nashville, right downtown, on Van Buren Street in a sequestered, sycamore-shaded, 60-seat open air theater that houses the Melchior Marionettes for four months of the year. Finding it is just the beginning of the magic.

Their 34th year in Nashville begins on May 28, with the 20-minute “Comedy Cabaret on Strings,” which is billed as “a show for all ages.” The show features half-life-size puppets designed and built by Peggy Melchior Pearson, the Artistic Director of the Melchior Marionettes, who handles these large, colorful puppets in full view of the audience.

It is as fascinating to see her dexterous manipulation of the strings as it is to see the resulting movements of the puppets—including the jungle bird who drinks a drink, the opera singer whose bosom heaves, while taking in the joy of the children in the audience. 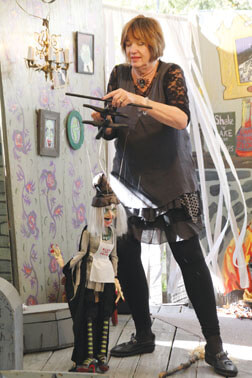 One visitor wrote: “I am an actor by trade, and not inclined to applaud a sock, but that is not what this is. Peggy Melchior’s theater seems straight out of a fairytale. The space is painted with colorful old-world designs, detailing the history of puppetry and crafted with meticulous detail. I found it all fascinating from a technical aspect, but once the show started—it’s pure art.”

Peggy has an obvious love of all that being a truly professional puppeteer involves. She loves the art of storytelling, the cultural universality of telling stories with puppets, making marionettes, painting sets, and connecting with those who become enchanted with her performances.

The pace of the show is quick and, while the script is completely suitable for children, there are arch remarks that also keep it entertaining for adults. Peggy notes that the audiences are often largely adult these days and that many people come back season after season. “IU students who started coming when they were five come back with their parents, and in the fall, ladies come decked-out for Halloween.” 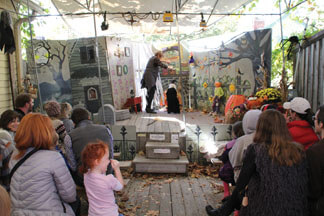 The Melchior Marionettes sprang to life in the early 1950s when Peggy Melchior’s mother, Erica, a German immigrant and art student, designed and built her own puppets and wrote her own puppet shows.

Peggy began doing her own puppet shows in the Indianapolis area in 1972, “almost as soon as I could drive.” Like her mother, she went to art school. She is a graduate of the Cleveland Institute of Art, with a major in graphic design.

Melchior Marionettes expanded in the 1990s with the addition of Debbi White, who is now the Executive Director of Peewinkle’s Puppet Studio in downtown Indianapolis. White “manages most everything associated with numbers,” as well as writing scripts for some of the 13 show that have been created for the Melchior Marionettes’ other venue, which opened in 1997.

The captivating art of puppetry and her own joy in performing, creating, and teaching also led to the involvement of Peggy’s daughter Heidi. You may not be surprised to learn that Heidi was also an art major, with a major in painting, who also started doing shows in Nashville as soon as she could drive. Now Heidi manages the technology associated with the productions. She is also the fiber arts teacher at Center Grove High School. During her fall break and weekends she appears as “Gertrud the Witch” at Peewinkle’s Puppet Studio.

It was a weekend drive in the early 1980s and a chance encounter with the redoubtable Alice Weaver that led to the Melchior Marionettes coming to Nashville. As the story goes, Alice was sitting in her rocking chair in what was then her antique store, The Ferguson House. Peggy complained to her that there was nothing for children to do in town. Alice replied, with characteristic brusqueness, “So why don’t you do something about it?!”

It was a galvanizing challenge. Peggy approached Andy Rogers, who had a little space at the end of an alley that he was willing to rent. As they finalized their agreement, Rogers cautioned her: “Don’t spend too much money.” Peggy and her husband built benches with lumber from the Helmsburg sawmill, installed a canvas roof, and Peggy began doing two shows each Saturday in 1983.

Now there is an 11-year-old granddaughter who has some marionettes that Peggy helped her build. Who knows what the future will bring?

The Melchior Marionette Theater opens up with “Comedy Cabaret on Strings” that runs through September (closed in August and some days in July for her son’s wedding in California), and follows in October with “The Slightly Haunted Puppet Theater.” Shows are on Saturdays at 1:00 and 3:00 p.m., with tickets on sale 15 minutes before show time. There are additional performances in the fall. Tickets are very inexpensive, and children under two are free. And to add to the magic, there is always free popcorn.

With advance notice, Melchior Marionettes can accommodate a variety of special performance and workshop requests, from weekday offerings to group tickets, to puppet making workshops, and more. To contact Melchior Marionettes, call 800-849-4853 or e-mail <melchiorpearson@gmail.com>.