story and photos by Bob Gustin

The house that Bill Root was born in, and lived in until he was married in 1967, is on display for all to see at the Brown County History Center in Nashville. But this is a scale model where one inch represents one foot, and the accoutrements take you back a century or so.

For nearly 200 years, the big white farmhouse near Frichton, Indiana, has been owned by the Root family. Now, one member of the family, Brown County artist Bill Root, has made a painstakingly accurate model of the historic house which is on semi-permanent display at the History Center.

The story of the Knox County home, which still stands, goes back to a time before Indiana was a state. It was a time, in fact, when Knox County encompassed not only what is now known as Brown County, but the whole of what is now Indiana, as well as parts of Michigan, Illinois, and Ohio.

Bill Root knows the history well. The story begins with Revolutionary War hero George Rogers Clark, who defeated the British in Vincennes and captured Fort Sackville. One of Clark’s allies was Francis Vigo, who received a large land grant after the war. Part of that tract was bought by a pioneer named David Snyder, who sold it to Simeon Root, great-great-grandfather of Bill Root, in 1825. The family has owned the house since, and Bill’s oldest brother lives there now. 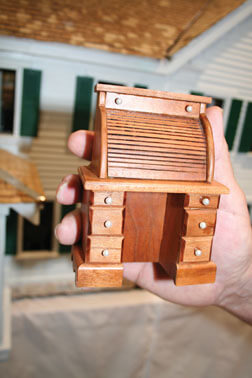 Simeon was a peddler selling buttons, cloth, and other items. He was living in Farmington, Connecticut, when he decided to go west and wound up in the little river town of Vincennes, then in the middle of the wilderness.

The original house was one story, about 16 by 30 feet, and was built around 1790. Its rafters and floor joists are made of logs. Bill’s great-grandfather built a two-story 24-by-32 addition onto the house in 1870.

Bill knows the dimensions well, since his model is a 1:12 ratio replica of the actual house. The house and all of its furnishings—from the grand piano to the roll-top desk and the cowboy boots at the foot of the bed—were built or carved by Bill. The detail is exquisite, down to the portrait of Abraham Lincoln on one of the walls.

Bill conservatively estimates he has 500 hours in the project, which includes 11,000 hand-cut cedar shingles on the roof (which, he notes, if stacked end to end, would reach almost to the top of the Eiffel Tower). Patience and discipline, he said, were the keys to building the model, which includes cedar, poplar, walnut, cherry, oak, pine, and other woods.

A Brown County resident since 1981, Bill has been a woodworker all his life, dating back to the wooden toys he made for his brothers and himself as a child, through sculptures of carousel horses which won acclaim in recent years, to the scale model of his childhood home. The model recently won first place in the professional woodcarver’s division of the 2016 Indiana State Fair. He also works in clay and does pen and ink drawings, and works construction.

He says the model was not built for competition, but began as a demonstration project. The outside of the home is a 95-pecent accurate replica of the house, with some frills added, but Bill admits there is some “artistic interpretation” in the furnishings inside, made to represent life in the 1870s.

The excitement of the 1870s, and its simpler lifestyle, appeals to Bill. He longs to see the huge walnut and oak trees—some with a six-foot diameter—which graced the land before clearcutting.

“Every farm had a catfish pond, beehives, apple orchards,” he said. “It was a ‘Charlotte’s Web’-type atmosphere.”

“If I could take my dentist, I’d go back there in a heartbeat,” he said. “But I wouldn’t want somebody to take my teeth with a pair of pliers.”

Alice Lorenz, treasurer of the Brown County Historical Society, says the model is one of the center’s popular attractions.

“Everybody is fascinated to look inside and see the detail and craftsmanship,” she said. “It’s such a remarkable piece of artwork.”

Work on the house began three years ago while Bill was demonstrating woodworking at Pioneer Village, and continued at the Indiana State Fair and during his spare time at home.

“I always wanted to build a model of the house so my cousins and others could see what it looked like in the 1800s,” he said.

The pioneer Roots knew William Henry Harrison, the ninth president of the United States and former governor of the Indiana Territory. One of the Root family stories tells of a time Harrison had breakfast with them.

The Brown County History Center is located at 90 E. Gould St., downhill from the Brown County Public Library. It is open 11 a.m.–4 p.m. Thursday through Sunday most of the year, but on Tuesdays and Fridays during winter months. Group tours by reservation are available at other times.