Skip to content
Music Returns to the Red Barn

Music Returns to the Red Barn

story and photos by Jeff Tryon

Many people are working to make Brown County and Nashville a place synonymous with music in the eyes of visitors, and a place of welcome and nurturing for local musicians and the local music scene.

In that spirit, local musician Doug Talley has taken on the challenge of resurrecting a forgotten jewel of a local performance space, the Red Barn theater, as Indiana RedBarn.

Located just west of Nashville on State Road 46, the Red Barn has a long history of playing host to musical acts. For many years, The Lloyd Wood Show made a popular home stand there. More recently, performer Robert Shaw had success with his Johnny Cash and Elvis Presley tribute shows on the Red Barn stage.

Now, Talley is hoping to revive the venerable barn theater for a new generation of songwriters and performers of every kind, and to create another space for welcoming public music to Nashville.

“When we got here there were no signs of life,” Talley said recently. “We’ve got a lot to do. But everything is in working order now and we’re going to run shows here Thursday, Friday, and Saturday nights this year and see if the town is willing to support it. If they will, we’ll keep doing it and have even more.”

“Traditionally it’s been country style and bluegrass, and we’re going to mix it up a little bit. We are, of course, doing plenty of country and bluegrass, but we’ve also got some rock music coming through here, some pop, some string bands—a really nice mix of everything, I think.”

So far, that mix has included bands like “The Waydown Wanderers” on the Midwest leg of their national tour and a young power trio called “The Trick” featuring two brothers on bass and drums.

“These are young kids, 19 and 20. They are something to see, really amazing,” Talley said.

Local staples The Indiana Boys will perform at the Red Barn, along with groups like Spank N Mickey, and other acts, which have been seen locally at places like Big Woods and The Pine Room. Talley said the more intimate, focused atmosphere of the small theater will help audiences connect with musicians.

Talley said there will be regular Thursday-night stands by local acts. 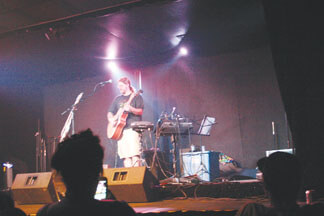 He said there has been talk of adding some matinee shows in October, possibly featuring popular local bands.
“I’m a local musician,” Talley said. “One thing that is really important to us here is that the local musicians be able to use this place. We’ve got some beautiful venues in the area but they’re not very accessible to the local musicians. So I’ve got some local music in here at least every week.”
Talley’s first up-close encounter with the classic barn theater was at a 2011 show.

“The place was absolutely packed, it was amazing. I had never really seen it from the inside before,” he said. “I live right up the road, so I’ve driven past it a thousand times, and there’s never anything here, never anything going on.”
“Local musicians are in agreement, it’s just a phenomenal place to play,” Talley said. “Not only does the room sound amazing, we’ve got a really nice house sound system. We’ve got technicians on staff for sound and lighting, so we make it really easy on the bands.”

Many other ideas are percolating. October brings comedian Brad Scott, one of Talley’s favorites. There’s also some talk of holiday shows, if the support can be found.

“I want to do a Sunday afternoon farmer’s market, shoot for noon until five, with fresh produce and some vending,” he said. “I know there’s another farmer’s market, but I know with my busy schedule I never make it over to that one, so we’re hoping we can get some people to come out after church and maybe check it out.”

The venue is scheduled through October, with plans to extend through November if possible.

“It’s a beautiful place. I’ve loved it from the first time I saw it,” Talley said. “I’m honored to be taking a stab at bringing this place back to life. If the community will support it, it will be an amazing place to be.”

The Indiana RedBarn is located 71 Parkview Road, on State Road 46 East behind Hesitation Point bike shop. The cover is $10 with BYOB. You can find it on Facebook at Indiana RedBarn. You can contact Talley at <GnawBrew@mail.com>.