The Science of Autumn

Brown County’s natural beauty has drawn artists to it for more than a century, and the combination of spectacular changing hardwood trees and a thriving arts colony brings thousands of visitors to the area each autumn.

While the poets and painters enrich our imagination with mysterious images of autumn colors, scientists know it is simple chemistry behind the changing of the leaves.

For thousands of years we’ve enjoyed, but also puzzled over, the cause of autumn’s majestic pronouncement of the coming of winter. At one point, it was chalked up to cooler temperatures and shorter days. Turns out, that’s right, but those conditions serve mainly as a catalyst. And the length of days is the main catalyst, because weather is not as reliable of an indicator as the clockwork of the heavens caused by the tilt of the earth on its axis, which controls the amount of sunshine each area of the earth receives.

Brown County artist Susan Ahbe said autumn is her favorite season because of the distinct light as well as the subtle secondary colors which accompany the bright tones of October. 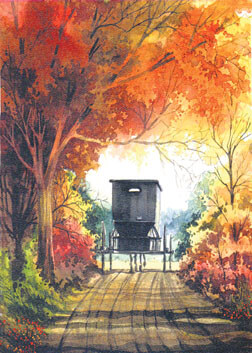 “There’s a softness to the autumn light in the morning,” she said, caused by the slant of the sun’s rays. Like Brown County painters before her, many of her pieces are local landscapes, rich with various shades of green in the summer and celebrations of reds, oranges, and yellows in the fall.

To understand these changes, imagine a tree as not only a living organism, but also a self-contained factory of sorts. The main products of this factory are oxygen, carbohydrates and chlorophyll. A tree releases oxygen into the atmosphere, helping keep humans and animals alive. It uses chlorophyll to capture the sun’s energy and power the factory. And it manufactures sugars and starches to feed itself.

Here’s how it works: Each leaf on a tree acts as a little solar panel, collecting sunlight to power the factory. Each root of the tree collects water from the ground and pipes the mineral nutrients it contains through the inner bark to the leaves. There, 90 percent of the water is evaporated.
Leaf cells containing chlorophyll absorb the sunlight and change water and carbon dioxide into oxygen and energy the tree can use to grow—mainly sugars and starches. This process is called photosynthesis. In the summer, chlorophyll fades as it soaks up light, and the tree constantly manufactures new pigment.

But those green chlorophyll pigments aren’t the only ones in a leaf. There are also chemical components such as carotenoids and xanthophyll pigments which are oranges and yellows. Most of the year, we can’t see them because of the comparatively huge amount of chlorophyll.

Here’s where the poet and painter mysteries come in. A tree somehow senses, through cooler temperatures and shorter days, that winter is coming. It goes into what might be compared to a bear-like hibernation, conserving its energy for the hard days to come. It does that by closing off the connection between the leaf and the tree using the chemical auxin. When a tree shuts down the chlorophyll factory, other pigments have their moment of glory. And other chemical changes may produce red anthocyanin pigments, which result in the red purple leaves of some trees, like Brown County’s famous dogwoods and sumacs. Other trees, like oaks, just turn a leathery brown because of the mixture of pigments in the leaves, including tannins.

Why shut down the factory? Some parts of a tree can survive freezing temperatures, but the fragile leaf structures cannot. (Evergreen trees have waxy substances to protect their needles, so don’t need to stop chlorophyll production.)

Jonathan Roales, assistant property manager for Morgan-Monroe and Yellowwood state forests, said there are dozens of species of trees in the Brown County forests. Among the most common are oak, tulip poplar, aspen, maples, hickory, beech, sassafras, and ironwood. And he particularly enjoys the brilliant autumn reds of Virginia Creeper vines.

State forests are popular for leaf-peepers in the autumn, but it also is a busy time for other uses of the land. Hunting is allowed on state forests, and the cooler temperatures of autumn bring out the hikers and campers. “People enjoy camping then because they can sit closer to the campfires,” he said. It’s also a good time for collecting wild edibles, including persimmons and paw-paws.

“We encourage people to come out and enjoy the natural resources around them, and we’re constantly trying to improve,” he said.

The amount of moisture in the soil and air temperature can have an impact on fall colors. Summer droughts can mean late falls.

It’s not easy to predict when the best fall colors will arrive in Brown County.

Jane Ellis, executive director of the Brown County Convention and Visitors Bureau (CVB), says those looking for fall colors should keep an eye on weather forecasts, since warm days and cool nights generally mean brighter colors. Nobody really knows how many people visit Brown County in the fall, but the CVB keeps track of the number of people who enter the Visitor’s Center on Main Street, and nearly a fourth of the 65,000 people the staff saw in 2015 came in October.

You can enjoy the colors and keep an eye on changes by checking the CVB’s leaf cam at <browncounty.com>. Ellis said a new, higher quality camera has been purchased to keep an eye on autumn.