Maria Sanderson has lost count of her violin concerts, but two years ago they surpassed 300.

She has appeared as a soloist and with philharmonic orchestras from Fresno to Miami. She has played with the Russian Ballet, and was part of a three-week tour of the best concert venues in Argentina. She’s a member of a prestigious orchestra at Indiana University and just returned after being a featured artist on the “From the Top” National Public Radio show from Hawaii. Yes, she has played Carnegie Hall.

She has been playing violin since she was eight, and has been a member of the renowned Indiana University Pre-College String Academy since then, following the footsteps of her two older brothers and older sister, all of whom also received scholarships for the program. Maria was first taught by her brother John, and has been a student of IU music professor Mimi Zwieg for seven years.
Listening to her older siblings practice violin stirred her interest. 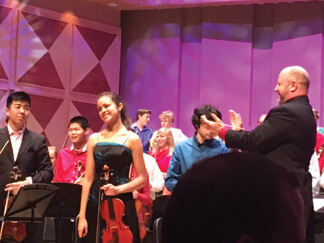 “I wanted to be able to express myself in the same way they expressed themselves,” she said. “It was something that I deeply yearned for.

“Music is a language of itself. It’s really the only language every nation can speak fluently and really understand.”
She has played pop music, folk music, bluegrass, gospel, and other genres. Pop music, she admits, makes her happy and makes her want to dance. But she always returns. 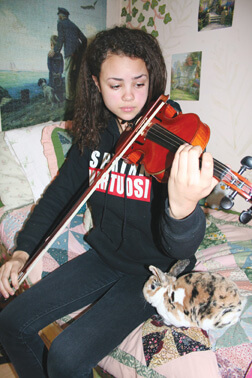 “Classical music tells a story I can relate to,” she said. “It has such a purity. I can tune in and focus on the music to really appreciate it. It has such a depth to it, a pure sense of joy.”

Her father, Jerome, is a priest for the Orthodox Church, a painter, a woodcarver, and a musician. He and his wife, Anna, have lived in northern Brown County for about 20 years. Their children are John, 27, Misha, 25, Molly, 21, and Maria. All were home schooled, and all excelled at the violin. John and Misha are also woodworkers.

“Maria Sanderson is the youngest of four children who have all become violinists which meant that there was a lot of practicing going on from the day she was born,” said Zwieg. “Maria’s expressive tone brings her own unique personality to her playing. Her love for music and the violin is her passport to an exciting future.”

Growing up, Maria played in the family band, and made lots of appearances around Brown County at benefits, for nursing homes, and at special events.

Earlier this year, Maria was awarded first place in the national Sphinx competition. Each year the Sphinx competition gathers the best young string artists in the world in Detroit and awards cash prizes. One of its goals is to diversify the arts by encouraging young black and Latino musicians. As first-place winner, she toured with the Sphinx orchestra in 24 cities for seven weeks.

She enjoyed the trip to Hawaii and the radio performance for NPR’s “From the Top.” But what really touched her, she said, is the effort the program makes to give back to the community in which artists perform. In Hilo, on the Big Island, she performed in a Hawaiian opera with indigenous students as part of an outreach program.

“That aspect of giving back allows kids who would otherwise not have been exposed to classical music to get a great introduction to it,” she said.

Anna said that experience, where the program asks what it can do for natives of the area they are playing, then sets about doing it, “was the most precious to me.” Part of the mission is also to celebrate young musicians the way other parts of culture celebrates sports heroes.

“You get to know people by playing music with them,” Maria said. “Classical music brings me out of the fast track of what today is like. There’s something calming about it.”

Though she admits to being nervous before big performances, she says lots of practicing helps build confidence, whether the audience is her parents or family pets.

She loves the travel that has come with her performance, because each place has its own history and culture she can experience. Other hobbies include painting, and one of her works, based on a Norman Rockwell painting, hangs on her living room wall. She also paints portraits of animals.

“Giving back” is something Maria has in mind as she pursues a lifetime in music. She’s now auditioning to colleges and enhancing her violin playing so she can “give an even purer image of the music itself.

“It’s important to have the best possible image of classical music to this generation,” she said. “I want to teach and find a way to give back what I’ve been given.”