Mary Ford and Herb McDonald pushing the truck out of the mud. photo by Frank Hohenberger

Brown County is indebted to Dorothy Bailey who compiled and edited Brown County Remembers, a touching chronicle of the lifeways of an earlier time. Gladys Mayne Christie McDonald’s story of her own family’s business fills several pages of Bailey’s history, detailing the stock and trade of the huckster routes, which evolved in time into a true “mom and pop” grocery enterprise in Bean Blossom. Five generations of McDonalds were central to the community: Charles Kessler, also known as Kess, and his father John Tom; Kess’s son, Herbert; and Herbert’s son, Jack, and Jack’s children: Diana, Jim, and Mike.

Kess began this enterprise when he bartered a watch and bicycle for a wagon and a team of mules in 1891. It was soon replaced by a larger covered wagon drawn by a team of horses. Kess then built a small grocery store in Bean Blossom. The huckster wagon was stocked from the store with staples needed by rural customers: flour, sugar, rice, dried beans, bar laundry soap, overalls, dress fabric, kerosene, nails, axe handles, lamp wicks, and brooms. Kess would stay overnight with a farm family if the route was long. 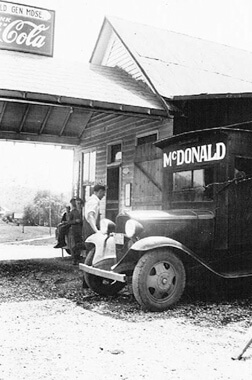 Herb McDonald in the early 1930s with huckster truck in front of the old store.

Goods were exchanged for cash, or chickens and eggs. The chickens and eggs would be taken to Indianapolis—a two-day trip—and sold to poultry dealers. Kess could then buy special order merchandise that he didn’t usually stock in the store. During the time he was selling from the huckster routes, his father, John Tom McDonald, would tend the store. Kess’s oldest son, Herbert, also helped out. When the wagon was nearing home on Greasy Creek Road, Kess would blow on a bugle to announce his approach. Herb listened for the bugle, and would meet his father on top of Bean Blossom Overlook with a second team of horses. The teams were joined together to bring the wagon down the hill and ford the creek just south of Bean Blossom. Before joining the navy at the age of eighteen, Herbert drove a huckster route for his father for a couple years. Upon his discharge at the end of World War I, Herbert worked in Indianapolis and Kess focused on the store, giving up the huckster routes.

Herbert married Gladys Mayne Christie and they had a son, Jack. When Kess died in 1933, Herb moved his family to Bean Blossom to take over the business. The foundation of State Route 135 had just been laid from Nashville to Bean Blossom.

Living next to the store, light was provided in the evenings with kerosene lamps. There was a kerosene stove, a handpump outdoors for water, and a privy. In 1934, The McDonald household was the only home in Bean Blossom with electric lights when Herb bought an electric light plant run by a gasoline-powered generator. An extension cord brought the power source to the house. The generator was used for a number of years before there were electric utility lines. Gladys recalled that if she wanted Herb to come home from the store when a late card game was going on, she would simply turn off the generator.

The store itself was small, but an important hub of the community. Wooden counters ran along each side and the back of the building. Groceries were stocked on one side, dry goods on the other, with hardware in the rear. Even when dry goods were discontinued, overalls and some hardware items were always available. A large three-doored icebox in the store was cooled by a hundred pounds of ice. One side was stocked with bologna, lunch meats, bacon, and pork loin. The other side held Coca Cola and other soft drinks, plus lard and oleo. When no ice was available, bacon was kept in a screen-wire enclosed cage in a side room.

Gasoline pumps, pumped by hand to fill a glass container, were stationed in the front of the store. Gas tanks of automobiles were filled by gravity flow from the container.
Rice, sugar, beans, and coffee were stored in covered barrels under the wooden counters. These staples were measured out in five pound bags and sold for 25 cents. Some items like coffee and beans were sold in one pound bags.

Herbert McDonald soon saw that the store was not supporting his family, so he bought an old school bus and mounted it on a new truck base. Installing shelves after removing the seats, he stocked the same merchandise available in his store. The new modern-version huckster wagon ran four different routes each week. Powerful air horns were mounted on the truck and let customers know he was arriving, and they would be waiting for him.

Children looked forward to the penny suckers that Herb had for each of them. Eventually Herb added a second huckster truck that was run by Carl Spicer and the entire Brown County was served. Gladys managed the home store. 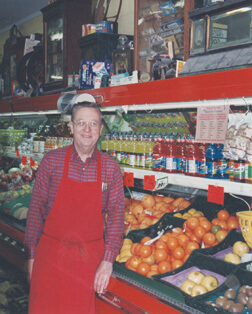 Son Jack served in the air force for four years and then graduated from Indiana University. He married Nina Jo Lewis, and they took over the family business when Herb retired. Jack built a new, larger store in 1962. Their children grew up “in the business.” Till just recently, visitors to Bill Monroe Music Park and Campground eagerly bought tee shirts at McDonalds’ store with the saying: If you haven’t been to Bean Blossom, You don’t know Jack! 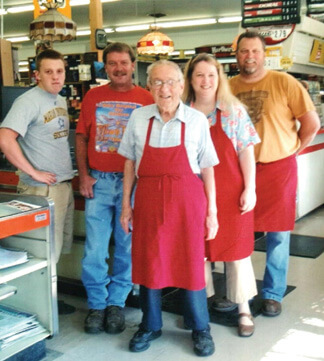 As Brown County folks frequent the new business they will no doubt think back on many McDonald memories.