after restoration photos by Cindy Steele

A wooden sign, just large-enough to contain the routed-out lettering, hangs from the long front porch of the old log house in downtown Nashville. It reads: “Hereshome.” And Lory Williams Winford has made Hereshome her home in a most interesting way.

Built and named in 1920s by Les and Leatha Seitz Walker, the 100+ year old log house has always—at least as far back as granddaughter Lory can remember—had a Hereshome sign.

The logs for Hereshome came from Kelp, an old abandoned village in the Brown County State Park located north of Hohen Point. During its active life in the earliest part of the 1900s, Kelp had homes, a church, school, store with a post office, and other buildings. When the land was sold to the park, the homes were dismantled and the logs reused. “I know that my grandfather bought these logs from the state park.” 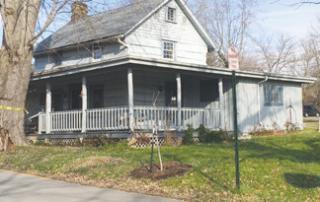 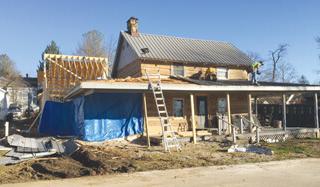 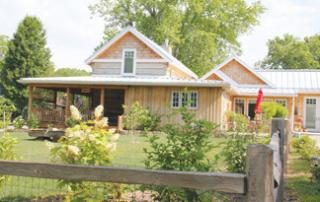 Lory was born in Terre Haute, grew up in Southern California married, and moved to Folsom, California. Her grandmother lived in Hereshome until 1989, and Lory and her family often came to visit. Widowed in 2013, she came back to Nashville for Thanksgiving that year. She sat on the steps of the old cabin, at that time unrented, and thought, “I could live here.” And immediately the plan began to form. “I needed a change. I had been a teacher forever. I didn’t want to stay in California. I’d always played around with art. I told myself I would move here and become an artist.” And so she did.

“I wanted to bring Hereshome back to its glory days. It was always a wonderful place to be.” At first glance, the property may seem very different from the log home pictured in the Hohenberger photo that hangs on her wall. But Lory was loyal to much that does not meet the eye. She remembered that her mother and grandparents used to sit out in a little courtyard on the south and east side of the house, “where it was the hottest.” In Lory’s design, the space became a lovely sun room, one of several perfect places to sit and enjoy the now-restored gardens, or the warmth of the winter sun.

Another memory was of her grandmother’s crescent-moon-shaped, stone-bordered garden. Over the years, the large stones had sunk so deeply into the earth that they had completely disappeared. “My grandmother had lovely gardens and I wanted to restore them.” So, Lory hired local gardener Carole Wells, who spent several days digging the stones up and several more weeks on the garden itself. Now the gardens again brim with native plants and are alive with bees. 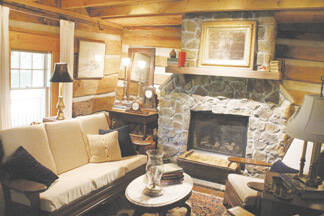 Lory delicately avoids confirming the rumor that the house was also haunted. “We always thought so as kids. My mother’s brother died here. I always thought he was here. We used to feel him downstairs in the living room. When I moved in, but before the work started, I was hearing noises, things were slamming, things were being put in strange places, cupboard doors were open. Meisha, (Lory’s cat) was making strange noises and acting really weird. But, I’ll just say there are noises, I won’t say its haunted.” Her other two companions, Jinny, a yellow lab, and Teddy, a blonde cocker spaniel, refuse to comment on the incidents.

Although the two car garage and art studio that have been added make the cabin seem much larger, Lory was faithful to the original size and floor plan of the cabin she inherited.

“I just wanted the remodel to be a reflection of the history I remember. And I wanted it to be something that fit in Nashville.”

The biggest problem was water under the house. There was no basement or crawl. As was the custom at the time, the wooden floor joists lay atop piles of stone. So to get control over the water we tore up all the floors, dug out two feet of dirt, added french drains and rebuilt the foundation. The logs were sandblasted, the topmost logs leveled, and the interior slightly reconfigured. 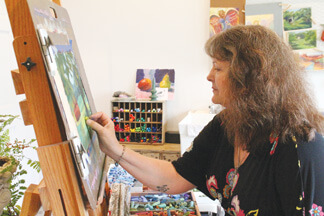 Although she describes herself as a “baby beginner” pastel artist, her landscapes betray her modesty. Shortly after coming to Nashville, she joined Art Alliance and now has a wall in noted painter Anabel Hopkins’ Fine Art Studio and Gallery, which is tucked behind Hoosier Artist Gallery. She loves the eclecticism of Nashville. “What gets me the most is how humbly quiet somebody with the most amazing skills can be. Somebody could come work on your house, maybe pour cement, but they’ve travelled around the world.” Lory has loved hearing stories about her family and encourages all those who knew them to stop by.”

“I love living here. The quality of the art and music is phenomenal. And if I’m not hugely successful as an artist, at least I’ll be happy.”