Fingerstyle guitarists will converge on Nashville, Indiana in July for the Sixth Annual Indiana State Fingerstyle Guitar Festival. The only event of its kind in the Midwest, it will bring 40 of the finest fingerstyle guitar players from the United States and Europe to the Brown County Playhouse on Saturday July 29. The event will also include activities the day before the competition and the day after. The Brown County community was chosen because of its rich history as an artist colony which is home to many accomplished acoustic musicians. 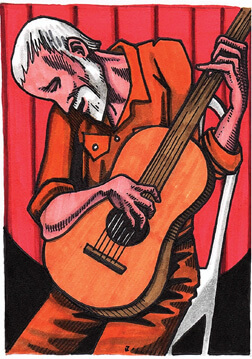 Artists will compete for a handcrafted Thomas Roeger guitar, valued at $5,500, and the opportunity to play during an evening concert that will feature world-renowned artists Michael Kelsey, Brian Henke, and Jack Wilson. The top three competitors will perform during the show.

The Indiana State Fingerstyle Competition is one of only eight competitions worldwide to be accredited by the Walnut Valley Festival which has been honoring acoustic musicians for the past 44 years during its national competition.

Fingerstyle guitar is the technique of playing the guitar by plucking the strings directly with fingertips, fingernails, or picks attached to the right hand fingers. The term is often used synonymously with fingerpicking, classical, or thumb style. Prominent fingerstyle players include Chet Atkins, Merle Travis, Tommy Emmanuel, and Andres Segovia.

“It’s like the Olympics. The player is creating both rhythm and melody with their thumb and fingers. Fingerstyle can sound traditional like Chet Atkins, or more contemporary like Andy McKee,” said one of the event organizers Chuck Wills. “All of our players train and practice intensely. Not just to play each note the best they can, but to create their own song arrangements. Part of their score is on originality and arrangement of their piece.”

The style of music played by the musicians runs the gamut of musical categories, from classical guitar to modern new age to flamenco. Wills said there are many ways of playing fingerstyle as well, such as fingerpicking, Travis picking, new age fingerstyle, slack-key guitar, classical, and flamenco.

Friday, July 28 will feature a party at the Brown County Inn from 7 to 11 p.m. Performers will include Cari Ray, and 12 nationally-ranked guitarists, including the previous winners of the competition.

Saturday, July 29 is the competition which will begin at 11 a.m. at the Brown County Playhouse. The top three will be announced at 4 p.m. The evening concert begins at 7:30.

Sunday, July 30 offers workshops at the Brown County Inn by some of the renowned guitarists. The schedule is as follows:

Tickets are available online at <indianastringfest.com> or <browncountyplayhouse.org> and at the Brown County Playhouse during regular box office hours: Thursday to Sunday, Noon to 5 p.m. and on show days from Noon to show time. You can purchase tickets for the competition, concert, or both.