~story and photo by Jeff Tryon

We have Selma Neubacher Steele to thank for the state historical monument at Belmont that preserves the great Brown County painter T.C. Steele’s studio and home, the “House of the Singing Winds.”

She shrewdly required the state to retain and preserve both the place and the collection —350 Steele paintings now at the home studio. For many years the property was neglected, and we are lucky to have it today.

She left us her gardens.

Now, decades of thought and planning are coming to fruition at the state monument as the restoration of gardens first designed by Selma Steele takes shape.

While T.C. Steele captured the beauty of Brown County on canvas, his wife Selma created extensive flower gardens on the property, which was an abandoned farmstead when she arrived in 1907, walking up the monster Brown County hill in her wedding dress to a modest four room bungalow that would come to be known as the “House of the Singing Winds.”

A prolific painter, Steele was at work whenever possible, leaving Selma free to design many different appealing landscape tableaus on the property.

“She was looking at this land pretty much as a blank
canvas,” said Cate Whetzel, program developer at the site. “She thought it was her job to decorate the home inside and out. As a gardener, she enjoyed the work, the planting of flowers.”

“She said her greatest joy came when she realized ‘the painter’ decided her gardens were suitable” as subjects for his work.

A popular Steele work depicts Selma in a floppy hat, bending to work the terraced gardens near the house, a small figure surrounded by clusters of multi-colored blossoms. 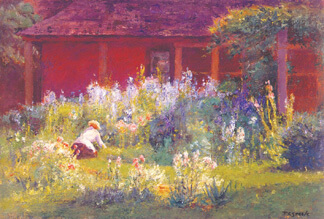 “Selma in the Garden” by T.C. Steele from the collection of the Indiana State Museum and Historic Site.

In fact, the gardens as they appear in some of Steele’s paintings provided some clues used to resurrect Selma’s gardens, which had fallen into neglect and virtually disappeared after her death in 1945.

Restoration began in 1989 based on the paintings and historic photographs showing the gardens during her lifetime, along with her own journals, correspondence, and gardening records.

Many original plantings or their descendants still survive, including long-neglected perennials which began to flourish when their beds were cleaned up and refurbished.
The wisteria vine that covers the front pergola, now over 100 years old, was planted by Selma, along with hundreds of daffodils which attract special attention each spring.
“People are always calling in the spring asking, ‘Are the daffodils up yet?’” said Whetzel. “We have her peonies which we were able to salvage. They were in a holding bed and have just been replanted.”

Selma was interested in using the “old-fashioned” flowers that thrived locally such as peonies, irises, and foxgloves.
Anthony Joslin, grounds and maintenance supervisor, describes the work as “garden archeology.”

He and crew members Jack Cathcart, Morgan Morris, and Ashton Morris, have been doing the actual work of digging out the beds, putting in stone pathways and installing an irrigation system. Last fall they planted bulbs coming from all over the country and around the world. The flowers have come up this spring.

They also installed a fence to keep out marauding deer, something Selma didn’t have to worry about.

Now, most of the “hardscaping” has been done and the garden is in pretty good shape, although new plants and flowers are arriving all the time.

A new historical marker was dedicated in May while artists painted in the restored gardens.

The next area that the crew will be working on will be Selma’s water gardens, the water lily ponds near the large studio on the way down to the Dewar log cabin.
In Selma’s day, the ponds also doubled as cisterns for emergency water supply.

Starting in September, a new visitor’s center will be constructed with modern plumbing and air conditioning. The “Singing Winds Visitor’s Center” will have a large visitors waiting room and will also house the museum shop and the admissions office. The center will be located over the hill where one of the Steele’s old guest houses once was.

The west wing of the House will be restored to look the way it did when the Steele’s were there. Currently, it is closed to visitors and contains state offices.

Whetzel said maintaining and improving the gardens at T.C. Steele will be an ongoing process. “I can say, from what I know now, things will be constantly in process. The garden is never done.”