By almost any measure, the Brown County Humane Society is an astounding success.

At 97.5 percent, the animal shelter has one of the highest “save rates” in the United States. It’s a premier non-profit organization in Brown County with a cadre of volunteers, robust community involvement and wide support.

A no-kill advocacy website called <saving90.org> listed Brown County as one of only two shelters in Indiana with a save rate of more than 90 percent in recent years. Nationally, only about 120 shelters reported a save rate of 90 percent or more.

BCHS, an independent, private, not-for-profit organization, is an open-admission shelter. That means it takes in all cats and dogs from Brown County which are surrendered to them, regardless of their age, health, breed, or how they arrived at the shelter. Last year, 519 shelter animals were adopted and 138 were returned to their owners. Eight were euthanized because they were suffering and too sick to survive and 10 died in the shelter’s care, according to Erika Imhoof, communications director.

Each animal that comes through the shelter is neutered or spayed and microchipped before being adopted. Sometimes animals will live at the shelter for up to three years, but the average stay for a dog is 22 days, and 53 days for cats. 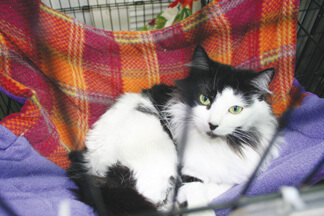 “It’s not just something you say you’re going to do,” Imhoof said. “It’s a commitment. I believe we’re responsible for the overpopulation, so we should be responsible for doing something about it. Animals have the right to happy, healthy lives,” she said.

BCHS does it with an annual budget of $507,000 and a staff of nine full and part-time employees, along with fundraisers, partnerships, adoption events, grants, donations, and foster homes.

Not all of the animals placed in the BCHS’s care are adopted at the shelter located at 128 South State Road 135. Some are adopted from pet supply stores like Petco in Bloomington and Petsmart in Martinsville, which partner with the shelter.

Other Brown County animals are transported to the East Coast to communities where there is a shortage of animals to adopt, or to rescue groups. In 2016, a total of 689 animals were saved by the shelter.

People adopting animals from the Brown County shelter come from many locations. In fact, Imhoof estimates only about 24 percent of the adopting humans are from Brown County.

SPOT is one of the tools the humane society uses to achieve its high save rate. Since the program began in 2010, the number of animals coming into the shelter has been reduced by more than 50 percent. Last year, the SPOT program spayed/neutered 474 animals.

“The Brown County no-kill shelter is a true community gem,” said Scott Rudd, Nashville town manager and economic development director. “The Humane Society provides essential services to Nashville residents, from picking up pets that get loose, to caring for stray animals, to being the voice for animals that are abandoned, lost, or abused. They give permanent homes to animals that end up becoming our best friends. “

Challenges remain for BCHS, however. Imhoof said among the bigger problems are a lack of space for animals and for volunteers, storage space, and an aging building. In the not-too-distant future, she said, the humane society may begin a fundraising campaign for a new, larger, and updated building. The shelter has been in its current location since 1986.

The humane society has more than 100 people who regularly volunteer to help the animals, and nearly 60 percent of its revenue came from contributions and grants. Other revenue comes from fundraising events, service fees, investments, and the county animal control contract. In all, 78 percent of the money raised went to programs, 11 percent to administration, and 11 percent to fundraising, according to the humane society’s annual report.

Jane Weatherford, a volunteer since 1982 and current treasurer, has been a featured speaker at animal rescue meetings around the country, and those who hear her message are usually surprised that a small rural community can achieve such numbers. But she walks her audience through a list of things—big and small—that shelter volunteers do to make it work. That’s everything from flyers around the community listing available pets to the time-intensive SPOT program.

She credits SPOT for a lot of the success. Volunteers get in a “beat-up van” and drive to remote parts of the county, meeting pet owners, delivering straw, and talking about neuter and spay programs. That one-on-one, nonjudgmental approach is a key to achieving results, she said.

“It’s the most rewarding thing to do in the world, in my opinion,” said Weatherford.

It is closed Tuesday and Thursday.