Life on the Farm

The hardscrabble life of the dirt farmer in Brown County in the early part of the 20th century was personified by Kin Hubbard’s Abe Martin, the materially poor but rich in rural philosophy comic character who still maintains his reign as county mascot. A family on a Brown County farm meant that your children had the proverbial “meal on the table,” three times a day. Other things were not easily come by.

The earth itself suffered from topsoil depletion caused by poor farming practices. Plowing the hills in the fall, the rich loam literally washed down the hills with spring thaw and rains, until only the clay underneath remained. Some farmers moved on to new locations where soil was not claimed by erosion. This was eventually remedied by the use of crushed limestone spread on the fields and readily obtained from nearby Limestone quarries. 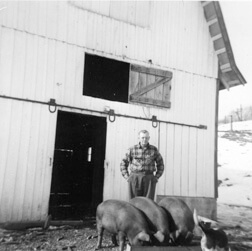 In southern Indiana, corn was the mainstay of crop production, with smaller acreage in oats and wheat. For “cash money,” some farmers planted tobacco and apples. The huge vegetable gardens, soil sweetened from the potash of wood-burning fireplaces and stoves, yielded a harvest that had to last throughout the year, till the next summer’s produce. Hundreds of jars of canned goods were put up in the summer kitchens by Brown County mothers. Hickory nuts and walnuts were gathered in earnest. Straw-lined pits stored cabbages, turnips, and potatoes when fruit cellars were not available.

Blackberries growing in the countryside yielded fruits for canning for the family as well as for sale in Indianapolis markets.

Corn ears were pulled from the stalk individually by hand and tossed into an empty wagon. Neighbors came and shared the work. As many as four or five families arrived with their teams and wagons shortly after daybreak.

This was a time of backbreaking labor, made palatable by the social contact. Some men took bets on which one could shuck the most corn in a day. There were “bangboards” attached to the sides of the wagons to help the ears land directly into the wagon beds. The corn fodder was tied into bundles for cow and horse feed. 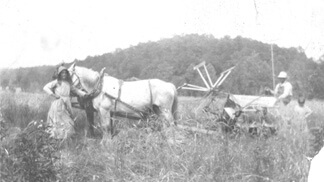 Some men were hired in, paid a dollar a day plus meals and a bed. Many farm dogs were taken along during corn harvesting so they could catch the mice and rats that ran out. Some young men from Brown County went to other farms in the west—Illinois, Wisconsin, and Minnesota—during the corn husking season. They earned as much as five cents per bushel, their meals, and a place to sleep in the barn.

With most farmers eating a hearty breakfast, the women’s work began before the light of day. They prepared eggs collected the day before, with ham or bacon from the family smokehouse. Plentiful biscuits were scratch-made and set on the table with maple syrup in the spring, or sop gravy from the meat. Dinner was started right after the breakfast dishes were cleared and was served by noon.
Many women worked in the fields with the men, especially when threatening weather required many hands. Abe Martin’s Alamanck pays homage to women’s farm labor: “Tilford Moots wuz exhibitin’ a wooden chain at th’ pustoffice yisterday that showed considerable genius. He jist carved it out with a reg’lar penknife Monday mornin’ while his wife wuz plowin’.”

Livestock included a cow for milk for the family, as well as for trade. Pigs were butchered in the late fall when it was cold enough for processing outside and the meat not spoiling. Pork was salted or smoked. A separate smokehouse was set with a fire tended on the dirt floor, sassafras and apple wood providing the most favored flavors. Homemade sausage and hams were salted and cured for winter use. The fat from the hogs was rendered down in huge kettles set over outside fires, yielding buckets of lard that were a mainstay of the farm kitchen for frying and baking.

Autumn was also the season for making soap. Soap was made by mixing fat with homemade lye on the big outdoor fire. Lye is the result of taking wood ashes and placing them in an ash hopper. Water was poured over the ashes and lye drained out the bottom into a bucket. Lye water was boiled in a huge kettle with meat fat after butchering. The soft soap left after meat disappeared from the batch was poured into long trays, scored, and broken into cakes when it hardened.

Winter provided a seasonal Sabbath from the heavy work of farming. Men hunted, tended animals, and had to keep wood chopped. But women made all the family clothes, cooked all the meals, and often fell asleep while holding a child on her lap after the evening meal.