Skip to content
Music and Mushrooms with Barry Elkins

Music and Mushrooms with Barry Elkins

Barry Elkins will tell you things have changed a lot in Brown County over the years. He has lived here all his life and remembers when Nashville felt a lot like Mayberry. “Punk Snider, the sheriff, didn’t carry a gun and whatever he ate for dinner the inmates in the jail did, too. It was a small town and everybody knew everybody,” says Elkins. He calls the folks that moved here from cities “come heres” and the natives “from heres.”

“There are a bunch of ‘come heres’ that are good people with a good heart—they care about what is happening.” His buddy Dan Bilger is one of those, a city boy from Chicago. Bilger is almost like a brother to Elkins. They have a special connection. They have been playing music together as Lucky and the Kid, and in several band configurations including the White Lightning Boys, for more than a decade. Elkins met Bilger while picking out at Bill Monroe’s with Dan’s neighbor Mike Nichols. Elkins knew Nichols since he was a teenager through his mom and dad’s church.

Elkins grew up around music. His mom and dad played the guitar, literally together—his mom picked while his father held the guitar and made the chords with his left hand. His dad’s mom played the banjo. Several family members on his mom’s side of the family played music including his uncle Otis Todd, who hosted a jam at his place for many years. Elkins picked around with his brother’s guitar but didn’t buy his own instrument until he was married and had his first child. “Smoke on the Water” was the first song he learned. Elkins’s daughter Heather says her mom talks about hearing that song a lot when they were first together. 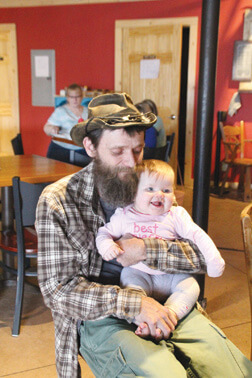 The late Sean Harris patiently taught Elkins to play rhythm guitar. Harris and Elkins were asked to fill in for some members of the White Lightning Boys for a few gigs and then stayed on. Their band took off. Elkins took up the mandolin because there were already two guitar players and a banjo player.

Elkins is shy when it comes to playing in public. He closes his eyes when he plays in front of an audience so he doesn’t have to see them. He feels more at home picking with friends in a jam setting. He always encourages newcomers to jams to participate and keep the songs coming. Elkins says, “Music is like therapy for the soul….That is how me and Dan connect. He knows what I am going to do and I know what he is going to do. You follow each other. You communicate. It is a spiritual thing.”
Elkins finds many connections through music, family, friends, and nature.

His dad and grandpa often took Elkins hunting and fishing, so he “grew up in the woods.” Mushroom hunting is a spring family tradition that he looks forward to every year.
“When Otis and my grandpa were young, when they were in their teens and twenties, they used to go along and see them [mushrooms] in the woods and kick them over. They wouldn’t even mess with them because people were afraid to eat them. They didn’t know what was poisonous. Then when everybody realized they could eat them—and these are good—everybody started picking them.” 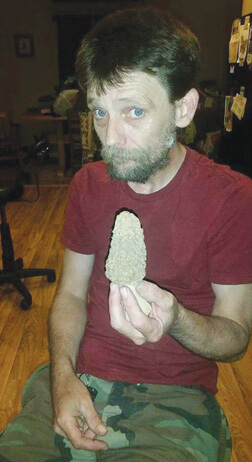 More and more folks go on the hunt so the goal is to be there first. Elkins explains that there are many types of mushrooms: blacks, grays, and yellows, woodsy types, dog peckers, umbrellas, and even more varieties. Mushrooms tend to grow better near certain kinds of trees. He says elm trees are the best and then there are ash, poplar, sassafras, and sycamore. He has found some in recent years near oak trees.

Some years are better than others, says Elkins. The past two have not been good because of long cold snaps. Elkins says the best atmosphere for mushrooms is a special combination of ground/air temperatures, and moisture in the air. They do best if there is a two week stretch of “just right” conditions. Elkins checks with Bird Snider, local mushroom expert and fellow band member, to know when the morels are out and big enough to eat. Elkins’s trained eye can even spot them from a car.

“I just want to find enough so I can eat a mess or two, and I can find enough to give away to folks like Steve Payne’s mom—I give her some every year—and Art Knight’s mom who is 103 years old. The older generation, they appreciate what it is, what it took to get, and what it takes to prepare….It is all concrete and steel nowadays, and hunting mushrooms is getting back to the primitive, hunter/gatherer, primal instinct. It’s kind of nostalgic,” says Elkins.

Elkins experienced some changes in his family this past year. He recently lost his father after a long illness. He also became a grandpa to Heather’s daughter Bryleah.
“There’s nothing like it. You watch them grow,” says Elkins. He descibes the joy of being a parent, now a grandparent, and gives his wife Stephanie credit for “doing it all.”