Roberta Chirko was one of the top models in the world in 1995, gracing the covers of Vogue, Elle, and many other fashion magazines. That was also the year she married a rock star on stage before 50,000 people at the Farm Aid concert.

Then she and husband Toby Myers moved to Brown County, settling in a rural home where the yard, she said, was mainly mud. She couldn’t get the theme song to the old TV show “Green Acres” out of her head.

But after years of fast night life and all that goes with it, Roberta knew it was time for a lifestyle change.

“I needed to stop,” she said. “I was 104 pounds then, I was working too much, staying up too late and doing all the bad stuff you’re not supposed to be doing. So, it was life-saving when he brought me here.”

Roberta is now the mom of a high school senior, gallery manager at the Brown County Art Guild, and still married to Myers, former bass guitarist for John Mellencamp.

“This community has really made me grow up to be a better person, I think. I’ve learned so much in the last 20 years.” she said. “I probably would have died if I’d stayed in New York City, and this gave me another opportunity to grow.” 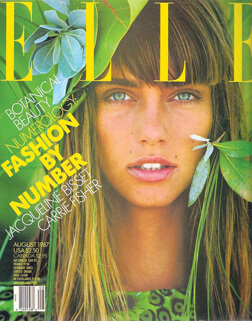 Roberta was born in Lyons, Illinois, a Chicago suburb, to plasterer Bob Chirko and his wife Donna, a fashionable dresser who loved parties. Roberta said she was more reserved, taking after her father, and spent her childhood years as a free spirit left to her own devices, dressed in flannel shirts and roaming the neighborhood. When she was 11, she moved with her mother to Washington, Pennsylvania, after the divorce of her parents.

That’s how she wound up in the audience of a fashion show before the Miss Teen Pennsylvania pageant in 1982, where television hostess Bonnie Barney spotted her and talked her into a modeling tryout.

Whisked away to New York City, promoter Carmine Verno shopped her at modeling agencies and decided on the famed Ford Agency. For a while she lived at agent Eileen Ford’s home, and her first job was a fashion spread in the back-to-school issue of Seventeen magazine. Ford decided Roberta needed some seasoning, and placed her in Munich, Germany, for about 18 months to get a feel for the European market.

Between 1986 and 1990, Roberta did lots of modeling, living in London, Paris and Milan. Work with photographer Oliviero Toscani landed her on the cover of many important women’s magazines worldwide.

Back in New York in 1992, one of Roberta’s Elle magazine covers caught the eye of Myers, then a member of Mellencamp’s band.

Mellencamp was dating Elaine Irwin, another of the Ford Agency models, and Roberta’s one-time roommate. Myers talked Irwin into making an introduction. Roberta was sick with the flu when Myers first came to her apartment. He brought her soup and took care of her. “He stayed and never left,” she said.

After 17 years in Mellencamp’s band, Myers quit when their son Cash was born in 1999, and Roberta quit modeling about the same time. Cash is now a senior at Brown County High School, planning on attending Indiana University next term.

And for Roberta, now 50, Brown County has become a healing and welcoming home.

“I did all those fantastic voyages and did all those amazing things but it really didn’t mean anything to me. This is way more important to me … finding my own morel mushroom is a sense of achievement to me. And having friends who will teach you how to knit.”

Her first Brown County job was at Ruth’s Garden, followed by a stint at Village Green preschool, where Cash attended.

In 2008, she and Tyra Miller opened Muddy Boots restaurant on Van Buren Street.

“I was newly sober and I needed a place to go that wasn’t alcohol-related that people could get together and have a good time,” she said.

It was hard work and long hours, but she met artists and other locals who had the spirit of lending a hand when something needed doing. She stuck with it for about 18 months before realizing how stressful the job was, and handing it over to Miller. The restaurant has new owners and has since moved.

Other jobs came and went. She worked in an accounting office, then at the For Bare Feet sock factory and retail store.

A part-time job at the Art Guild led to the job as gallery manager in 2015. She’s passionate about the Guild’s long and distinguished history and says the job has been a good match for her people skills and a knack she has for displaying works of art. And she’s working hard to make the Guild even more a part of the community and welcoming to all.

Jill Perlman was Roberta’s agent for more than 30 years, and is now with Iconicfocus, an agency which represents supermodels of the 1970s, 80s, and 90s. She said she has “begged” Roberta to resume her modeling career.
The message of Iconicfocus, she said, is that fashion is ageless and women want to see what other real women look like.

Perlman said it was Roberta’s eyes and smile that made her a great model. “She just lit up the camera,” Perlman said.

A person can be beautiful on the outside, but also on the inside, she said.
“Roberta has both.”