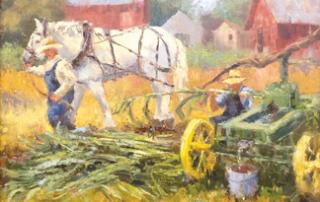 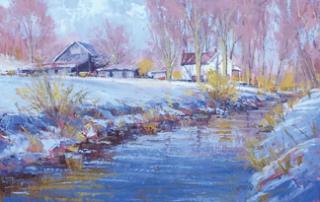 When artists in the early 1900s shouldered their rucksacks full of painting gear and hopped on the train from Chicago to Brown County, they were coming for one reason—to paint our charming scenery. Like an invasion from another world, artists with pallets and easels appeared along dusty roads and streambeds. “It looked like plumb ignorance” to native Felix Brummett, who spied Adolph Shulz dabbing at a canvas in the middle of a cow pasture.

Several of the artists liked it so much that they settled to live year-round in Nashville’s cabins and cottages, establishing the largest art colony in the Midwest. Their paintings of Brown County in all seasons became a popular commodity and remain treasures to this day.

Sought-after early artist Ada Walter Shulz donated her sublime “Mother from the Hills” to the Brown County Library long before her paintings brought six-figure prices. The library also displays paintings by T.C. Steele, William Forsyth, Will Vawter, and L.O. Griffin, among others.

Current artists Chris Newlund and Thom Robinson have each decided to carry on the tradition of donating one of their best works to the library. Newlund’s “Sweet Legacy,” depicting a horse-powered sorghum mill, and “Winter Warmth,” a snow scene at Kelp’s farm on Greasy Creek Road by Robinson, have been added to the library’s permanent collection. “It’s always been a special painting for me,” Robinson said. “I was saving it to give to somebody.” Newlund similarly kept back her nostalgic painting. “I had put it up for sale but then decided to keep it,” she said. “If I sold it I might never see it again and my family wouldn’t see it. It’s so appropriate for the Brown County Library.”

“It’s such a gorgeous library,” she continued. “I feel like a library should physically and visually reflect the character of the people that it serves, and Brown County’s does just that. I’m really honored that they accepted the piece. I have a hope that someday a kid will look at the painting and say, ‘Mommy, what are they doing?’ so that legacy won’t die.”

Though the library has owned this valuable collection of artwork for many years, there was no separate committee of people to manage and care for it before 2012. After taking over the director’s position at the library, Stori Snyder invited several art enthusiasts to form an official group to oversee the collection, and the Art Advisory Committee was born. Regulated by Library Board approved policies and procedures, the committee has taken over the collection’s maintenance, care, and display.

The addition of quality recent paintings has brought fresh imagery to the library’s walls, and no two artists could be more fitting to make these much-appreciated gifts. Newlund and Robinson are long-time painting partners who love to go out into the county and find inspiring subjects to paint on location. “One of the things that determines where we paint is what’s happening in the landscape at a particular time—the weather conditions, fullness of creeks, what’s blooming, etc.,” Newlund commented. “Usually one of us is in touch with what’s happening out there.”

The two experienced artists have been painting together for twenty years. Robinson said, “I’ve always enjoyed painting with Chris since the first time I met her. When we’re painting outside we like the same subjects. We travel around Brown County, New Harmony, or Brookville looking for things to paint. And at the end of the day we’re always good for a beer, something to eat.”

Newlund appreciates Robinson’s easy companionship and outdoor savvy. They both like to paint early morning light and often paint in winter, eagerly awaiting first snow. Robinson wears rubber boots with toe warmers if it’s really cold, and sometimes stands in the creek water while painting. “The water’s usually warmer than the air. I learned that trick [while] fishing, years ago,” he said.

Newlund gave much thought to her donation of “Sweet Legacy.” “I have a love of libraries and always have. Moving a lot [while growing up], libraries were a sanctuary—an escape, entertainment, and a safe place. As a young adult I didn’t have much money so I looked for free information and guidance wherever I could—how to raise kids, how to grow food, etc. Now I’m happy to say that my children and my grandchildren all love libraries.”

The Brown County Public Library art collection belongs to us all. Its care is in good hands with the Art Advisory Committee and conscientious Library Board. The generous donations of paintings by Chris Newlund and Thom Robinson are perhaps just the beginning of quality donations by today’s Brown County artists.