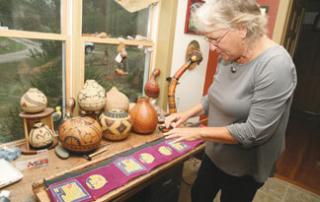 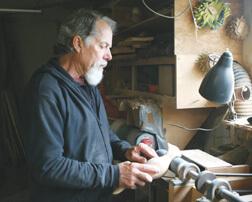 ~story and photo by Chrissy Alspaugh

The artistry that’s come out of Joe and Peggy Henderson’s Hickory Hill Gallery and Studio over the past two decades has wowed buyers from across the U.S.
What began as a carpentry and basket-weaving shop has evolved into a creative gallery that whisks visitors out of Brown County and into far-away worlds with one-of-a-kind Asian-inspired silk scarves, whimsical wooden creatures, jewelry that showcases natural treasures harvested from coast to coast, gourd paintings paying homage to the Native Americans, and more.

And now in their 60s with newfound freedom to create, the Hendersons are undeniably just starting to heat up.
“When you don’t have to ‘make’ based on what will sell, and you don’t have young kids anymore, you are more free to experiment and do more based on what you love,” Peggy said. “We’ve definitely entered a new stage in life, and it’s very freeing and exciting.”

Peggy was born near Story, grew up in western Bartholomew County, and hopped home to Brown County in her early 20s. Art was always in her blood and in her life. For Joe, a third-generation carpenter, Brown County was the last stop on a path that wound from New Castle to Toledo, Chicago, and Texas. The pair met while working as bus drivers. Married thirty-seven years, the Hendersons proudly share stories about their two grown sons and teenage grandson.

Blessed is how Peggy describes it.

When their boys were 10 and 14, Joe quit his full-time carpentry job to first spend a year building their center-hall cape cod and then launch his own business. Peggy began selling art while staying home to raise their sons as a way to contribute financially to the family. Most of her work for the first 20 years centered around colorful, woven baskets ornately decorated with beads, feathers, and a host of other natural treasures. Joe’s pieces slowly transitioned from functional custom carpentry into finely designed clocks, hand-carved bowls, and comical wooden cats, birds, and other creatures.

For years, the couple made their livelihood selling their wares at art shows. But all that traveling took its toll. “When you’re always rushing to restock for the next show, you can’t experiment like you want to,” Peggy said. This year will be its own kind of experiment for the Hendersons, who plan to sell at only a handful of shows close to home. Instead, they will focus their time honing new skills to showcase in Nashville’s Spears Gallery, By Hand Gallery in Bloomington, and during the annual Back Roads of Brown County tour in October.

Pieces coming from Hickory Hill this year will be unlike any their clients have seen. Both avid readers and researchers, Peggy is eager to deepen and enrich her skills as a painter while Joe is in the early stages of crafting his first acoustic instruments.

The couple also plans to spend more time this year than any before exploring the U.S., a practice that throughout their careers has influenced and enriched their work.
Settled comfortably next to Peggy in a living room furnished with his tables and decorated with her paintings and gourds, Joe laughs that most of their creative endeavors have been spawned by a desire to make pieces they love but don’t want to pay someone else to create. “I think what might set us apart is our patience to learn to do things ourselves,” Joe said.

The couple also is unique in their iron-sharpening-iron lifestyle that’s helped their art, and relationship, flourish. While they operate out of separate studio spaces, the Hendersons break from their work several times each day to spend time together quietly exercising, going for walks, or just reading on the porch. Whether one sees his frames delicately surrounding her paintings, or her colorful necklaces carefully suspended on his carved displays, it’s impossible to miss how beautifully one’s work complements the other’s.

It’s also impossible to miss, Peggy said, that plenty of other couples their age are starting a new chapter in life—one after a career. Thankfully, she said, working at Hickory Hill Gallery and Studios isn’t a life either of them hopes to walk away from anytime soon.

“It’s every part of us,” Peggy said. “We love what we do, and we’re nowhere near ready to be done.”