Also guitar, banjo, piano, violin, dobro, bass, flute, pedal steel, harmonica, drums, ukulele and, as he puts it, “whatever I can find.”

A 26-year-old Brown County native who lives in the Helmsburg area, he has been a member of some of the top area bluegrass bands since he was a teen, and just this year toured with a national country music group playing bars, festivals, and dancehalls.

Brandon also did a solo project based on his real-life experiences, which he calls “Infamous,” the story of a heartbroken cowboy told as a country and western honkytonk opera. It’s all original music, told in a series of tales by three cowboys sitting around a campfire at night in the High Sierras, and available to hear free on <soundcloud.com>. On the website, he describes himself as Dusty Heenahan, “spranged from the hollers of Brown County…a multi-instrumentalist, composer, producer, songwriter, whiskey drinker, gun slinger, forward thinkin’, country singin’ son of a gun.” And he warns that some of the lyrics are “explicit.”

“Infamous” was a response to a difficult time in his life. Within a two-week period, his father died and his partner of four years left him and moved to the West Coast. In the stories, a cowboy’s one true love leaves him and he sets out on a journey through the desert to try to find himself.

“Every bit of the story is true,” he said. “It was a way of dealing with what was going on. Just working through it. There are songs written for my father, my mother, friends.”

Music has a healing power, and Brandon uses it.

His grandfather, William Bernard Lee, was a fiddler who has a road named after him at Bill Monroe’s Music Park in Bean Blossom. His father, William Lee Jr., was also a musician, playing guitar and bass. And his mother, Julia Waltman, has roots in Brown County going back to some of the first settlers in the area. He says his parents encouraged him to explore music. 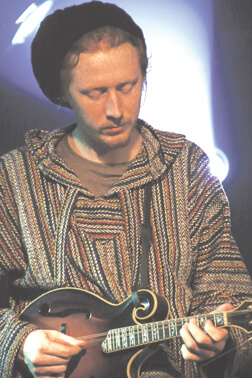 Maybe that explains why Brandon feels more at home here than in the other places he’s lived and played.
“I do not feel as open, as free, or have the same level of creativity in the city as I do here in Brown County. There’s less stress, leaving more room for creativity.”

Brandon has lived in Brown County all his life, except for a two-year period in Bloomington while he was studying music education at Ivy Tech, and a brief stint in northern California. He was mandolin, guitar, and fiddle player as part of the Reel Tyme String Band for about four years, and then played mandolin in New Old Cavalry.

Earlier this year, he took a job playing with Ernest Tubb’s nephew, in a band called Lucky Tubb and the Modern Day Troubadours. They played honkytonks and dance halls, a rockabilly festival in South Carolina, and other sites. But Brandon says he left the band because the touring was too stressful.

He formed a four-piece band back in Brown County, and is playing country, rock, and his own kind of music locally. Next, he’d like to record another solo album, a concept album which tells a story. He has lots of ideas for the project, but isn’t sure which direction it will take. Eventually, he’d like to make a living as a musician doing studio work.

His influences are as diverse as his musical performances. They include Harry Nilsson— especially his album “The Point”—Frank Zappa, The Beatles, Flatt and Scruggs, Bill Monroe, Sam Bush, and others.

Are musicians born or made?

Brandon took 10 years of piano and violin lessons as a child, and says that education is important to be able to communicate music with others, “but that doesn’t mean you can’t just learn by ear.”