For more than a century, the Helmsburg General Store has been an anchor in the Helmsburg community. The rusted freezer out front houses the minnows that have been the bait for countless prized fish and the booth inside has been a gathering place for friends to catch up.

The previous owner, Karen Sooy, ran the store for 27 years. She loved to talk to tourists as well as the locals and would often kid about giving “good directions and bad advice.” Ready to retire, Karen put the store up for sale.

When Leonard Richey saw the “for sale” sign, he knew almost instantly that he had to buy the store. Richey and his wife, Sharon, had been customers of the store for more than 20 years and knew how important it was to the community.

“The people really rely on it,” Leonard said. “They need a place that’s open in their community.”

Sharon said she originally thought the idea was crazy, but quickly realized what a great opportunity this would be to serve the community.

“I’ve been coming to this area since I was a kid and love everything about it. It’s just gorgeous. We love coming here to hike and fish and camp,” Sharon said. “We plan to retire here, so we want to help this community in any way we can.”

Before opening, the couple painted and added lighting, but did not change much else.

“We wanted to keep the character of the store,” Sharon said. “People asked if we were going to change the sign or replace the rusted freezer, but those are the things that make it memorable. Those things tell the history of the store, so we’re going to leave them just the way they are.”

In April, a year and a half after seeing the “for sale” sign, the Richeys opened the store, not knowing what to expect.

“We didn’t have much inventory because we had no idea what people would want,” Sharon said. “So, we asked, and literally everything on the shelves is the result of people telling us what they wanted.” 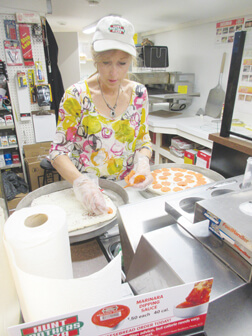 Two months after opening, and after hearing an overwhelming number of requests, the store began offering cooked-to-order pizza and lottery tickets.
The small store is now packed from top to bottom with nearly everything you might need. The back room is full of local craft beer and wine (and other alcohol), a refrigerator filled with bait (including neon night crawlers), and various fishing and camping gear. The front room houses everything from snacks and cold drinks to household goods and healthcare items. Grocery items include everything you need to cook a quick meal. There is even frozen ground beef and sausage.

“We put a whole lot of thought into everything we put on the shelf,” Sharon said. “If it’s a reasonable request, we usually add it to the shelf.”

The busiest times are lunch and Friday evenings, Sharon said.

“The pizza has been a huge draw,” she said. “And a lot of times people will just come in to talk to us or to catch up with each other.”

That neighborly feeling is exactly what Leonard was hoping to achieve.

“The neat part is that the people that keep coming back are local,” he said. “Most of them come in just to visit. That’s what’s so cool.” 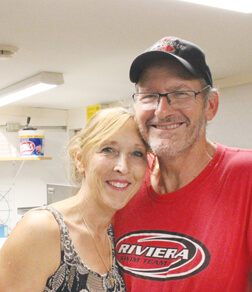 Leonard and Sharon, and their four children, live in Indianapolis, but Leonard said he looks forward to retiring from his construction company in a few years so the family can move to Helmsburg and he can work full time at the store.

“I am from a small town and that small-town feeling is just nice. I’m looking forward to getting back to that,” he said.

“The people here are great. I enjoy sitting around talking to everyone. It’s just a fun, enjoyable, relaxing atmosphere.”

The store is open from 8 a.m. to 7 p.m. Sunday through Thursday, and from 8 a.m. to 8 p.m. Fridays and Saturdays. For more information, visit the store’s website at <helmsburggeneral.com> or search for the store on Facebook.

Sadly, Karen Sooy did not get a chance to enjoy her retirement. She passed away on the last day of September. Folks gathered at the store on a Sunday in October for her memorial.