That’s the question Robb Besosa, owner of Hoosier Barn & Table in Nashville, asks each piece of wood in his shop as he takes stock of its unique grain, shape, and feel. It’s a question he’s also asked himself and many others over a lifetime that’s been anything but conventional. And—like polished fine furniture may be hard to discern in a block of raw timber—Robb’s gentle manner and easy smile can belie the fact that he’s as serious about his place in the community and in history as he is about the beautiful woodwork he produces.

HB&T opened last March on North Van Buren Street in Nashville, offering high-quality handcrafted furniture and housewares made of local hardwood by Robb and his sons, as well as pieces by fellow woodworker Joe McGlothlin and metalworker Brad Cox. The response from visitors has been promising, and the shop has become a welcome addition to the local artisan community. “People have been so encouraging. Other businesses send people my way all the time, and I do the same for them.” said Robb.

Some of Robb’s favorite projects at HB&T have been custom work, which have included wood lighting fixtures, cabinets, and made-to-order tables. “The best part is when you show somebody the finished piece, and they tell you it’s even better than they imagined,” he said. Robb’s also found a niche in using wood reclaimed from area barns he dismantles. “A barn isn’t just a structure—it’s part of history,” he related. As part of thanking a family for pieces of their barn, Robb presents them with a photograph and short biography of the structure, and objects made from it are stamped with a tribute to its provenance, often including GPS coordinates of where the original barn stood. 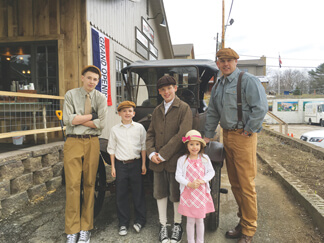 As with many of Brown County’s attractions, HB&T isn’t merely a place to shop, it’s an opportunity to appreciate local history and a way of life that’s becoming less commonplace in American culture. On weekends, the Besosa family—parents, kids, and even Robb’s mom—often dress in pre-Depression era clothing and demonstrate woodworking on the front porch using antique tools and machines. For Robb, it’s about communicating the importance of what a town like Nashville represents. “It causes people to ask questions about our history,” he said. “There’s meaning in what we do, there’s a story there.”

Robb’s own story branches out in different directions. Growing up at the foot of the Catskills in New York, and then in rural Florida, he and his brothers indulged in their love of the outdoors and working with wood. But after a series of family tribulations left a teenaged Robb with tough challenges and questions, he committed himself to helping other troubled young men. Along the way, he met his wife Mary, and the two spent the next twenty years running counseling ministries for teen boys in the United States, Canada, and the Dominican Republic. When the time came to focus on their own family, they settled in Indiana, where Robb started a remodeling business while Mary homeschooled the kids.

It was at the urging of his son, twelve-year-old Luke, that Robb first pursued opening a retail shop featuring his woodwork. “It was always a dream of ours, but I told him we couldn’t afford it,” Robb remembers. “He said, ‘How do you know that?’, so I started looking around, and that’s when we found this place.”

The buildings on the North Van Buren property needed a lot of work in the beginning, but thanks to Robb’s construction skills and Mary’s support, HB&T now shares space with three other local businesses, plus a vacation rental called the Buffalo Nickel.

Despite what may seem like a big life change, Robb is as solid as a pin oak in his decision to set up shop in Nashville. To him, the values he holds dear are also embodied in his business: honest work, faith and family, and appreciation for the beautiful simplicity found in nature. And though he’d be happy to see one of his children take over the shop someday, Robb says it’s much more important that they grow up to be adults who carry those values forward.

For a visitor, it’s refreshing and inspiring to see the dedication to craft and family that drives Hoosier Barn & Table. For the Besosas, their hope is that the answer to “What do you want to be?” is not just “Our customer,” but a person who appreciates the historical and spiritual meaning behind what they see during their time in Brown County.