Joe Bolinger’s life has taken several turns, but the constant rhythm through it all has been his love of his Brown County roots and his banjo.

Bolinger graduated from Brown County High School in 1999. The recipient of the Brown County Community Foundation Lilly Scholarship, Bolinger set out for Earlham College, where he double majored in philosophy and religion. After graduating from Earlham in 2003, he enrolled in divinity school with the Unitarian Universalist church.

“I was interested in becoming a pastor, but I soon decided that I wanted to pursue politics instead,” he said. “I wanted to work on policy from behind the scenes, not as a politician.”

In 2007, he graduated from Indiana University’s Master’s of Public Affairs program, but still was unsure of his future.
“While in the master’s program, I realized that I really liked research, solving problems, learning new things and writing—all things that a professor does,” he said. “So, I started working on my Ph.D. so that I could become a professor.”

In December 2016, Bolinger graduated with his doctorate degree in U.S. social welfare policy. His dissertation focused on government housing vouchers. And while he was adequately educated to take on a life of professorship, Bolinger realized that the lifestyle was not what he was looking for.

“To get a job as a professor, you really have to follow the job where it takes you,” he said. “You don’t get to choose where you end up, and I wanted to stay near Brown County to be close to my girlfriend, my family and friends, and my bands.”

So, once again, Bolinger is at a crossroads in his life. While he is looking for work in policy research or public management, his life’s one constant, music, remains. He is a member of two bands, The Indiana Boys and The Lean and the Plenty.

Bolinger said he can’t remember life before music. Both of his parents play instruments—his mom the piano and his dad the guitar, mandolin, and banjo. It was his dad who first taught him to play the banjo when he was 12 years old. 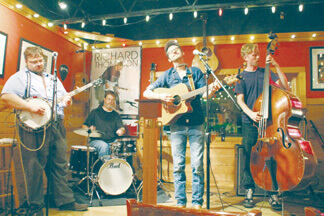 “Everybody played the guitar. I wanted to play something different,” Bolinger said. “I played at home and with friends and occasionally at church and at nursing homes. I never thought it would be my full time job. It’s a very hard way to make a living.”

Bolinger said both of the bands he plays with play music that could be described as Americana with Bluegrass overtones. Both bands book shows within a two-hour car ride. Bolinger sings and plays banjo in both, but his greatest joy comes from writing songs.

“Music gives me a way to express my thoughts and feelings. It’s about saying things in a way that can be meaningful to other people,” he said. “Our songs have something to say. The hardest part is getting people in front of you and then getting them to listen to the words.”
Bolinger has written songs on the Indiana Boys three albums and The Lean and the Plenty’s debut album, which they are recording now. His songs, with titles like “Drunken Poets Dream” and “Black Mountain Blues,” cover the gamut of emotions, from haunting and tragic to sarcastic and scathing.

While he loves writing and performing, Bolinger said for now he still plans to look for full time work outside of the music industry. 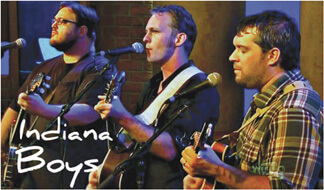 “Music is a pretty decent part-time job, but to make a living at it takes a big step in commitment. You basically have to live on the road and I don’t really want to do that,” he said. “When you take the individual parts of it, it doesn’t seem worth it because it’s a lot of work without much reward, but as a whole it’s an artistic adventure that I feel good about.”