The smell inside the Nashville Fudge Kitchen is like something out of a childhood dream —straight out of Willy Wonka’s Chocolate Factory. Walking out without purchasing at least one sweet treat is nearly impossible.

Located on the corner at 175 South Van Buren Street, the shop is full of confections of all shapes, colors and flavors. The Nashville Fudge Kitchen, open daily from 10 a.m. to 6 p.m., has been fulfilling the needs of those with a sweet addiction since 1983, and like their business card says, it’s “so much more than fudge.”

There are currently more than 27 different fudge flavors, 97 mouth-watering gourmet popcorn flavors, and countless candy, ice cream, and gelato options. Owners Vic and Debbie Bartes developed their own recipes. Visitors can watch as the team makes their creamy fudge, gourmet popcorn, roasted almonds, and gelato.
The current most popular store items include peanut butter fudge and caramel corn. Debbie has her own favorites, though.

In the rainbow of popcorn varieties available, the snickerdoodle recipe holds a special place in her heart because it was inspired by a batch of blue-ribbon snickerdoodle cookies she took to the county fair as a young girl. 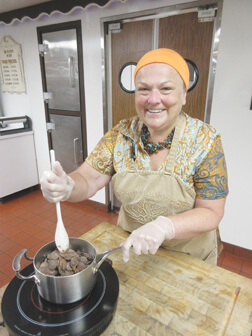 “And the caramel apples are probably the best I’ve ever had in my life,” said Debbie.

The apples are bought from a local orchard and the caramel is slow cooked from scratch.

While the Fudge Kitchen is now considered a must-see confection stop, the store had a humble start. When they bought the store from the previous owner, Debbie and Vic had only one day of training before opening to the public. With only that very basic training, the store only sold a handful of fudge flavors.

“I bought text books about chocolate and went to tradeshows to learn more,” Debbie said. “And vendors were very knowledgeable and helpful.”

Fudge was selling well, but Debbie realized she needed to offer more than just fudge.

“Parents would always come in with their kids and say, ‘Do you want fudge or ice cream? You can’t have both,’” she said. “And I thought to myself, we can’t keep losing business to ice cream.”

So, Debbie enrolled in an ice cream short course at Penn State University. She also traveled to New York City to study with gelato masters from Italy. 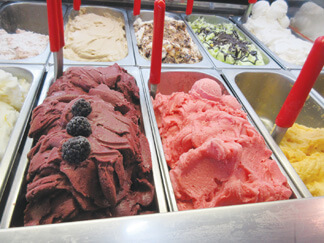 “While traveling I had fallen in love with gelato,” she said. “Nashville had ice cream shops, but nobody sold gelato.”
Gelato is a frozen delicacy similar to ice cream but made with whole milk instead of cream. It has about 70 percent less fat, a more silky texture, and more intense flavor. Gelato also has less sugar and less air churned into it in the freezing process.

Shortly into the business, Debbie said customers also started asking about popcorn and caramel corn. The previous owner had left an old popper in the store, so Debbie decided to learn yet another craft. 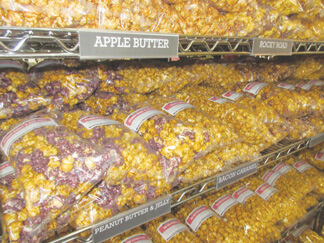 “I got hooked up with a vendor who had a mix and I worked with that mix until I understood how it was made. I knew I wasn’t going to sell something made with a mix, but it helped me learn,” she said. “Once I had that figured out, we started developing all of our own recipes and began selling our homemade popcorn.”

Today, they sell traditional popcorn and caramel corn, but they also sell original flavors like Mediterranean Herb, Sriracha and Cincinnati Style Chili. The popcorn is so well received that it has become a popular corporate gift and brides are incorporating it into their wedding receptions.
Every year in January, the Fudge Kitchen team sits down to discuss which flavors of all of the products worked well and which did not sell as well as they would have liked. They also brainstorm new recipes and potential products.

Debbie said she continues to look for new ways to satisfy customers’ sweet cravings. She is considering developing a line of marshmallow products and potentially a line of ice cream cakes and novelties.

“I really love what I do,” she said. “I still love being hands on. It’s really fun to work in front of people and explain how everything is made.”

She is also currently challenging herself in a completely new direction—as a business property owner. This spring, she and Vic bought Possum Trot Complex, which includes the Fudge Kitchen, a couple of other businesses, and an outdoor courtyard with tables and chairs for guests. They are currently in the process of renovating the property and plan to convert currently unused space into rooms for overnight guests.

“I think you reinvent yourself a few times in your life and I have a lot more to learn,” Debbie said.

To learn more about the Nashville Fudge Kitchen, visit <nashvillefudgekitchen.com>.