You know you’ve arrived at Sidney Bolam’s Bohemian Hobbit Studio when you see the “Willie Nelson for President” sign on her fence. People of all political leanings live in northern Brown County, but no one has ever complained about the sign. Instead, they stop and take selfies with it.

It’s not surprising that Sidney chose Willie. They’re both renegades at heart, both a little unconventional, and both believe in the power of art.

For Sidney, that art expresses itself by transforming solid blocks of limestone into sometimes delicate, sometimes bold, but always soulful works of art. The hobbit part of her studio name refers to her diminutive size, and her choice to live as one with nature. The bohemian part acknowledges the rebel in her. 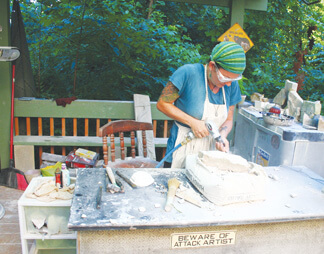 Her studio is part of the annual Back Roads of Brown County Studio Tour, a free, self-guided tour of 18 artist studios open to the public every day in October.

“It’s a humble little peaceful garden,” she said of her studio. “It’s a hobbity kind of place,” she said, referring to the book by J.R.R. Tolkien, who also wrote the Lord of the Rings trilogy. “I’m a big Tolkien nerd.” And being of German heritage, she notes the woods of Brown County are not unlike the Bohemian forest in Germany.

Sidney and her husband Brenden King live at 4912 South Shore Drive in the Needmore area in northern Brown County, where her outdoor stone carving studio is also located. They have two children, Theo, 8, and Violet, 5.

She was born in Pittsburgh, but grew up in Lafayette, Indiana, and came to Indiana University to study art in 2002. Sidney discovered she loved being a student, earning a double major in fine arts and anthropology, plus minors in art history and Native American studies.

Stone carving was not her first foray into art. She was initially mostly a painter, doing portraits in oils and acrylics, plus doing illustrations for Native American coloring books published through IU.

But painting and illustration never touched her soul. “I didn’t feel like it was right for me,” Sidney says of painting. “It never got me going.”

Sidney and Brenden have lived in Brown County for about 10 years now. As a young mother, her art took the form of crafting, including making wooden toys for the kids and felting useful items.

“I love being a mom,” she said. “But I couldn’t just be a mom.” Sidney reached out to a friend, Brown County stone carver and artist Jim Connor. She told him she needed an artistic outlet. Connor invited her to his studio, let her use his carving tools and gave her lessons. There she learned to use a Dremel tool, which gives a different look to stone carving.

Connor says he saw a lot of potential in Sidney’s work.

“She really has an artistic eye,” he said, “she just needed someone to show her the fundamentals of stone carving. I knew she had the ability, but what she’s done is simply amazing. She does beautiful work. She took it and ran with it.

“I’m really proud of her,” Connor said. “She’s surpassed what I’ve ever done in stone carving.”

Sidney loves being outdoors and being a part of nature, while using nature’s own stones to make art. While most of her pieces are limestone, she has also carved from sandstone, alabaster, soapstone, pipestone, and other materials. Her pieces often reflect nature as well, with owls, herons, snakes, and other animals featured.

Connor is high on the list of people who helped her on the journey to being an artist, including a high school art teacher, other artists, and the community of like-minded people she has found in Brown County.

“Art keeps me healthier,” she said, “even if I never sold anything.”

She also has a flair for historic time carving, especially “that weird period between the Celts and the Romans where you had a mashing of the two cultures.”

She uses all the traditional and modern stone carving tools, including pneumatic chisels, hand chisels, a Dremel tool, sharpened screwdrivers, hammers, and whatever works. And she carves outside year-around, saying that going into the elements to do her art sharpens her focus.

But she loves the folk artists, too.

“I was devastated at the vandalism of Stone Head,” she said, referring to an historic stone mile marker created by Henry Cross and located in southern Brown County. Late last year, the head was knocked off the statue and is missing.

To soothe herself, she made a little replica of the Stone Head statue after it was destroyed.

“I tell my kids you should never be proud of destruction. Creation is so much more to be proud of.”