Workers are wrapping up a major project at the southeast corner of the Village Green in downtown Nashville.

The project includes a complete renovation and restoration of the old town pump house and the creation of a community “play space,” taking the area back to its roots as a community gathering place. 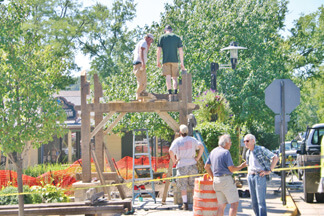 “People played down there,” said Nashville Town Manager Scott Rudd. “There were horseshoe pits and that’s where kids played. There are some great Hohenberger photographs of kids playing marbles in the dirt right in the exact spot where we’re building a play space.”

The new Village Green area will serve as a community focal point as it did a century ago. There is a “front porch” feel to the large roofed portico that runs along one side of the lot.

“Really, we hope it’s used even more by locals than it is for visitors,” Rudd said. “It’s the first place in downtown Nashville specifically for kids to play.” 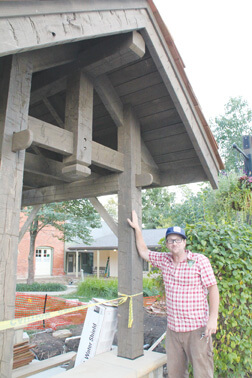 The project has involved the cooperation of different governmental entities, local businesses, and local artisans.

Artisans and contractors were chosen by the Nashville Arts & Entertainment Commission to create a “fun, interactive play area and gathering space in the center of downtown Nashville,” according to the grant award.
The Beamery, a firm based in Helmsburg, designed elements of repurposed logs to be used as balance beams and stepping logs for kids.

Robb Besosa created benches and game tables out of salvaged wood. His Nashville business, Hoosier Barn and Table Company, saves wood from old barns and cabins and turns them into furniture.

Stone carvers Mary Ann Whitaker and Tommy Thompson
will carve some pieces for the space at their nearby studio in Antique Alley.

Dynamic Concrete is pouring, stamping, and staining some concrete on site.

The town pump dates back to about 1890, according to the Brown County Historical Society. It served not only as a valuable water resource at a time when there were no public water projects, but also as a community meeting spot, where the ebb and flow of everyday life in a small rural town could be sampled and gauged.

By July of 1949, the town had installed a new water system fed by Ogle Lake in Brown County State Park. The pump was laid to rest with an elaborate funeral.

The Brown County Rotary Club raised funds for the pump house effort—including $3,500 raised in raffle ticket sales, which was matched with a grant from district-level Rotary.
The Rotary Club obtained a donated pump, historically similar to the original pump, which could be used in a future water feature. The water, however, would come not from the old well, but from new town water lines which were added.

Local builder/craftsman Brian “Bird” Snider and local stone masons the Bay & Sons, in collaboration with Steve Miller Architects, created a new pump house to cover the well. Snider logged and hand-hewn the yellowwood beams for the structure. Snider will create a kiosk that will mimic the design of the pump house.

The Indiana Department of Natural Resources and the Brown County Visitors Center will support the kiosk with a graphic rendering of maps of the county and town, guiding people to interesting things to do.

“We’re partnering in a new way with them to cross-promote all of the activities in the county regardless of who oversees them,” Rudd said. “It’s a great partnership.”
There will be similar kiosks at the park and the Hoosier National Forest, he said.

The project began in earnest last May, when the town of Nashville received a $50,000 grant for “Place Based Investments” from the Indiana Office of Tourism Development and Office of Community and Rural Affairs to build an all-ages play space on the corner.

“The key has been extensive public involvement in shaping the future of this space and relating it directly to our history,” Rudd said. “That’s the really neat thing that I’ve seen evolve out of this project.

“It’s hard when you bring that many people to the table and it’s not something we’re used to doing,” he said. “That’s kind of a new way of working together even within the town. The Arts and Entertainment Commission and the Food and Beverage Commission, both town entities, have been really strong partners.

“Getting everyone to work together has been a learning experience and we’ve learned a lot. It’s going to be a great thing.”