More than 200 ukulele enthusiasts from across the nation will gather January 26 and 27 in Nashville for the second annual Brown County Ukulele Festival.

The festival, sponsored by Nashville’s Mainland Ukes, will be held at the Brown County Inn. It will include concerts by top ukulele players, workshops for all skill levels, open mikes, jams, strum-alongs, and vendors.

Mike Hater of Mainland Ukes says he started the festival as a “dry run” last year. Admission was free, but this year $50 tickets will be required to attend. A total of 250 tickets were printed, and by mid-December, nearly all had been sold.

“My idea was that after Christmas, Nashville is a ghost town until spring,” Hater said. So he wanted to fill up the town with ukulele players for a weekend in January. “I hope to bring a little money into the town and offer something fun at the most boring time of the year, and also help some other businesses.” 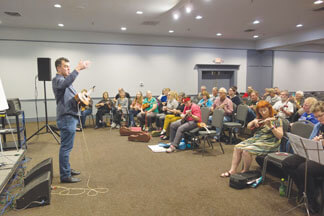 Mary Curtin, a sales representative for Brown County Inn, said last year’s festival was good for the Inn because January is typically a slow time, and the ukulele players were “a very nice group of people who really enjoyed Brown County.” As the festival continues to grow, she believes its economic impact will continue to broaden to other businesses in Nashville. She said the Inn has been sold out for the weekend of this year’s festival for several months.

The music is not limited to one genre, Hater said. One of this year’s headliners, Lil’ Rev, does old-timey songs from the 1920s on, but also modern tunes. And he’ll put on a couple of workshops, one called “Strumtastic,” explaining different strums for different musical genres, and one called “The Boogie Blues of Leadbelly.”

Another headliner, Emi Sunshine and the Rain, is a family band from Appalachia, led by a teenage ukulele player and singer gaining national recognition for her playing, singing, and songwriting. Other performers include Flea Bitten Dawgs, Barrett Haselwood, and Seeso. 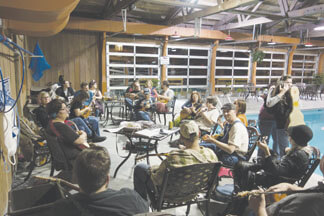 Musicians will also perform at the Brown County Inn’s bar. That part of the festival is free and open to the public.
Most of the ticket-holders will be ukulele players who come for the camaraderie.

“It’s a big thing to jam with other ukulele players,” Hater said. “Ukulele players are a nice, friendly weird, and everybody wants to jam.”

Ukuleles are more accessible than other stringed instruments, and not as daunting to play.

“People don’t have any expectations when you play the ukulele, so you don’t disappoint anybody,” Hater said. Some customers who buy his ukes would not have considered more difficult instruments, and the little ukulele brings music into people’s lives.

Mainland Ukes imports instruments, then does final work on them, including putting on high quality tuning pegs and strings, checking the intonation, action and frets, and making sure everything is in order. He says it’s this last 20 percent of the work on the ukulele that improves the quality.

He and his wife Tookta started the shop in 2008. Instruments range from the 21-inch soprano to the 30-inch baritone ukulele, and he has sent instruments around the world, from Easter Island to Ireland.

Mainland Ukes has also donated instruments to Brown County schools for use in music programs.

Famous musicians from George Harrison to Cliff “Ukulele Ike” Edwards (the voice of Jiminy Cricket) played the instrument. But most people only think of one song when they hear the word ukulele: “Tiptoe Through the Tulips” by Tiny Tim (Herbert Khaury). Hater says the 1960s hit song was just a kind of joke by Tiny Tim, who was actually an incredibly skilled musician who recorded 1920s music, saving the songs from oblivion. Still, the one-hit wonder is kind of a sore point among serious players, so Hater says it probably won’t be played by many of the uke enthusiasts coming to town later this month.