A Midwestern tourist destination, evolving with the times. The most beautiful forest land in Indiana. A haven for the local arts scene. Depending on your interests and personality, you might describe Brown County as any one of these. But for Frank Jones, a lifetime in Brown County has led him to embrace all three—and his love for them comes through in his music.

Frank was raised in Bellsville, where rural families like his were big, hardworking, and strong. “My great-grandfather built houses, my mom ran a store, and my uncles laid block,” he remembers. “Us boys would put up hay, hang tobacco, dig potatoes, whatever.”

Soon, Frank and his brother Dickey were picking up musical instruments after they put down their tools for the day. “Once we found our way to town with our guitars, we found all the happenings, we were part of a tribe,” says Frank of the musical scene around Nashville, Indiana in the early 1970s. “And when the hippies moved in, we saw it as extending our base.”

Though still in high school, the brothers found themselves welcomed as the entertainment at big local bashes (“Playing for 300 people at that age does wonders for the ego”), and the attention they got from older musicians was a catalyst for their own musical ambitions. Frank confides, “I loved it. I thought, ‘I could do this forever…and I think I’m gonna!’”

But don’t mistake Frank as purely an extrovert, living for the next full moon party. As much as he loves being around friends, he says he feels the most like a songwriter when he’s alone with his thoughts and feelings. “Best advice I ever got? If you can be happy playing for the trees, you can play for anybody,” Frank says. 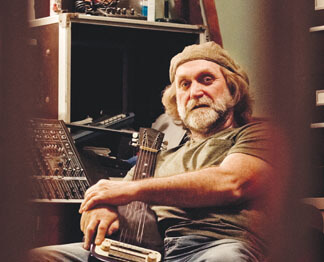 So, it’s fitting that he called his new CD Lined in Sycamore. Along with Kim, his wife of thirty years, Frank lives on ten acres outside of Nashville, where the peace and solitude provide the perfect backdrop for writing and composing his brand of bluesy country-folk. And while he does draw upon his more gregarious side for his material, he says he ultimately does his best work deep in thought about the less-obvious things in life, experiences and themes we might take for granted while lost in the revelry of a crowd.

“Lined in Sycamore is a combination of stuff I recorded a while back, and some newer stuff,” Frank says. “Most of it’s originals, but I also put to music some poetry by Tramp Starr, a Brown County preacher who wrote up until the 1940s.” The CD also marks a tragic time in Frank’s career—it’s the last opportunity he’d have to work directly with Dickey, who died of a heart attack earlier this year. “Dickey was the ultimate wordsmith. I could take anything to him to work on. I’m honored to have some of his stuff on this one.”

While losing Dickey so suddenly was devastating—”It took me nine months to get back on track after losing him,” Frank says—he’s already working on honoring his brother’s legacy as a musician and a person with his next project, a musical tribute made up exclusively of Dickey’s music and featuring other local artists who were close to him, including Barry Elkins. “People around here still play Dickey’s songs, which he loved,” says Frank.

As heartbreaking as losing Dickey is, Frank finds comfort in the people and the places in Brown County that have been here for him over the years. “I’ve played music here, owned a restaurant here, and even lived in California for a little while,” he explains, “and it’s the people that brought me back, the spirit of this place.”

For Frank, Brown County’s unique position in history and on the map account for its unique people. “The geographical layout—we’re this green square in the middle of South Central Indiana, it’s physically good for us. And our history has this mystique from being tucked away early on. At one time, you couldn’t even find us until you got lost. We were farmers and migrants, and then these sophisticated artists settled here and mixed with the most basic rural moonshiners and criminals who came here to hide up through the 1920s.”

Frank’s sentimental fondness for Brown County doesn’t mean he’s stuck in the past, however. Although he understands the impulse of many seasoned artists to cling to familiar ways, he embraces twenty-first century technology to his work’s benefit. In addition to his enthusiasm for the creative control digital recording brings to his music, Frank’s also launched Lost Cabin Lodge, a YouTube channel devoted to Brown County’s arts and history. “I’m all about documenting everything that’s good about the past and the present,” he says. “It’s true that the old analog way forced you to really get your chops up, but the permanence you have with being able to get more stuff out there with digital is unequalled.”

Fans of Frank’s songwriting and performance should look for Lined in Sycamore to be available in the coming weeks. More information on Frank’s recordings and live appearances can be found at <frankjonesmusic.com>.