David Watters is making history, actually he’s building it. Watters’ Helmsburg-based company, The Beamery, specializes in timber framing, a method of construction that is thousands of years old. While The Beamery uses state-of-the-art equipment, their work is an homage to a time when buildings were made from logs chopped with iron axes and communities worked together to put up a building.

Timber framing is an age-old construction style that involves using heavy timbers to frame a structure rather than today’s more common slender (2×6 inch) dimensional lumber. It was the most common building method used throughout the world until the early 1900s when the demand for cheap, fast housing required a faster, less labor intensive technique. Craftsmen began reviving the timber framing tradition in the 1970s, but The Beamery is still one of only a handful of businesses in the region to build structures that look more like a pieces of art than buildings. 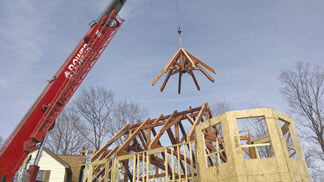 Watters said he fell in love with the style as a child.
“In the summer, we would travel from our home in Fort Wayne to our family cottage in Maine,” he said. “On the drive, we would pass a lot of barns, which always intrigued me.”

He liked the barns so much that his mom bought him a book about barns for his eighth birthday. His love of timber framing continued as he got older. He even built a balsa wood model timber frame bridge for his eighth grade social studies project.

“It was my first official timber frame project,” Watters said. “From then on I was always interested in architecture, building, and design.” 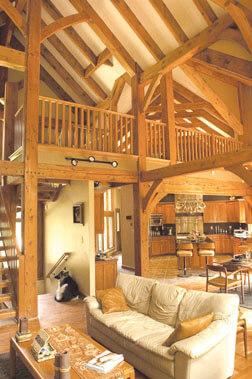 In high school, Watters took part time jobs working with contractors, framing houses, working with trim contractors, and with his family’s custom kitchen cabinet business.
“I got a lot of experience at an early age,” he said. “I even started my own business in college installing cabinets.”
After earning his degree in environmental design from the University of Colorado, Watters took a job with an architecture firm as an apprentice in New Hampshire. A year later, his father made him an offer that changed the course of his life. He offered to finance a project for Watters to design and build a house.

“That’s what really got me started,” Watters said. “I jumped out on my own building houses. They were really fun projects, all around Golden Lake. There was a lot of craftsman style building and timber framing was very popular over there. That is the place and time that influenced me the most.”

When he was 30, Watters moved his family to Fayetteville, Arkansas to design and build what is now a nationally-recognized timber frame brew pub.

“It took two and a half years to build and I learned a lot about everything, from building to demolition to working with people,” Watters said. “I was 30 years old and had 55 employees. That was a huge project for me.”

In 1998, Watters moved back to Indiana to join a design firm as a project manager, eventually becoming a partner in Smith, Lake and Watters. The firm specialized in high-end homes on the north side of Indianapolis. When Watters realized he was incorporating timber framing into every project, he decided it was time to go out on his own.
Watters started The Beamery in 2001 and has grown his customer base to include projects throughout the region and as far away as Oregon and Virginia. Some of the more well-known projects include the Boy Scouts Bridge at the Indiana State Fairgrounds, the covered bridge in Parke County, Indiana, the Marian University Sports Complex entrance and Ecolab, Butler Pavilion, and Zionsville Outdoor classrooms. The company also designed and built the 23,100-board-feet timber structure of the Indiana Regional Headquarters for the Girl Scouts of America.

One of the projects Watters is most proud of was a home built in Brown County. The four-story, 4,479-square-foot home was the very first certified passive home in Indiana, which means it meets rigorous, voluntary standards for energy efficiency and has a reduced ecological footprint.
“That was a fun and challenging project. We really like challenging projects. I have an incredible team,” Watters said. “There are so many minute details you have to focus on that most people don’t even think about. I think the concept will probably grow as energy costs rise and as more people want to get off of the grid.” 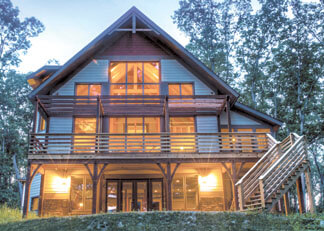 Unlike other building methods, a timber frame home can be put up in a matter of weeks. The process is able to move so quickly because the entire structure has been assembled before it ever leaves The Beamery’s workshop.

“This is an incredible property,” Watters said. “It has allowed us to work throughout the entire year because we’re in a controlled environment. We were able to put up a 4,000-square-foot home in two weeks because it was all built in the shop before we ever got to the site.”

Watters said it takes about four weeks to put the structure together in the shop, using timber framing’s unique joinery of mortises and tenons, secured with wooden pegs.

“Timber framing really is a craft,” Watters said. “I would like to do more apprenticeships because not many people have the skills anymore and it is one of the oldest building methods in the world.”

The unique combination of his degree in architecture and his extensive experience in building and construction creates a dynamic combination, Watters said.

“As a designer you want to push the envelope, but as the builder you have to make it work. I think it’s a benefit to the customer, because I carry the responsibility of the project all the way through. I am much more able to help them make decisions up front because I know the build process. I always tell myself that what I create in my mind is not done until the space is complete and someone walks in.”

If you are dreaming of your own timber frame building contact The Beamery through the <thebeamery.com> or call (317) 502-7906.