Keith Bradway caught his first glimpse of the Bean Blossom Overlook in 1934 with the completion of State Road 135.

“I would stop for the view at least once on each visit to my mother who lived near Fruitdale,” Bradway said. “I greatly enjoyed the panorama which extends about three miles northwest to Oak Ridge and its continuation about six miles to the north where a gap allows the passage of State Road 135.”

Aside from the natural beauty of the Overlook, it was also a major attraction among tourists who would stop to enjoy the view, have a picnic, or even paint the scenery.

The Bean Blossom Overlook was nestled in the heart of the designated “Brown County Parkway” along State Road 135 North between Bean Blossom and Nashville. This corridor was set aside to preserve its scenic beauty in 1932 by the Department of Natural Resources State Parks director, Colonel Richard Lieber.

In 1985, the DNR gifted approximately 150 acres of land that included the Bean Blossom Overlook, to the Brown County Parks and Recreation Department to ensure the property remain in local stewardship. Since that time, very little has changed. However, the maturing hardwoods continued to grow, blocking the once majestic view of the countryside.

As a founding member of the Brown County Park Board, Cathy Martin was involved when the state highway department transferred ownership of the three land parcels of land in 1986. 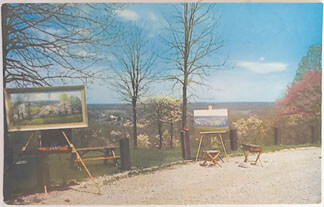 1959 postcard of the Bean Blossom Overlook during the Redbud and Dogwood time. Work by artists Clayson Baker and Dale Davis.

After the land transfer, the board took bids to gently timber the land. The money raised from the timber sale were used to supplement money raised by the park board members as a match from an anonymous donor. After numerous citizens and local groups met the match, the park board was able to purchase the approximately 40 acres known as the Piefer Farm.

Subsequent to the purchase, the board asked for suggestions for naming the park and chose Deer Run as its name. Over the years, under the guidance of the Brown County citizen board members and its directors, the park has evolved into the playing fields, play equipment, disc golf course, and picnic areas that it is now.
Within the past three years, the county was able to once more selectively timber the overlooks and use the money raised to add adjoining acreage to Deer Run. That acreage is now the enclosed children’s play area.

Since the last timber clearing in the mid-1980s, the view that inspired visitors faded behind an army of trees. Saddened by the outcome, Bradway wrote a letter and asked local officials to take on the project of clearing the Bean Blossom Overlook view.

“Now the view is totally hindered by the oak trees in the clearing on the hillside when the leaves are out, and I no longer bother to stop,” Bradway wrote in a letter. “The property on which the wayside is located including the land extending down the hill is owned by Brown County Parks and Recreation. I would like to have those trees pruned, thus making the view once again worth stopping for, and adding substantially to the attractiveness of our county.”

Mark Shields, director of the Brown County Parks & Recreation Department, has been credited as the driving force behind the project.

“I was approached by members of the community requesting that the Parks Department consider re-opening the view of the overlook. I was told that, decades ago, the spectacular view from this overlook rivaled that of any other in the state,” Shields said.

With approval from the Park Board, and after examining several options, Shields reached out to a local timber buyer and arranged for a timber harvest to take place to re-open the view. This allowed the project to be completed with no cost to the Parks and Recreation Department.

“Since the re-opening of the overlook view, we have received numerous compliments regarding the project,” Shields said. “I’ve also noticed that now, each time I drive past, the overlook typically has several visitors picnicking or just enjoying the view, much the same as it did decades ago.”

Martin said she is extremely proud of the way the community has come together to make this project a reality. In addition to the tree clearing, local Boy Scouts are planning to construct new picnic tables for the shelter house at the Overlook, a fact that especially interests Martin whose son’s Eagle Scout Project in the 1980s was constructing picnic tables for Deer Run’s shelter house.

“I personally had forgotten how glorious a view could be enjoyed at the overlook. Every time I go by as a passenger, I crane my neck so that I can savor the magnificence,” Martin said. “Also, except in the deepest night, cars are parked in the lot. Others, too, seem to be relishing the impressive panorama.”