~story and photos by Jeff Tryon

Back around the turn of the century a young couple settled around these parts and staked a claim up along the north end of Van Buren Street.

When Matt and Amy Gray bought the whole north end of the block in 2003, there were seven different tenants with different kinds of shops. But as tenants would retire or move, they would take over the space, slowly re-inventing it to their own unique vision.

They created Copperhead Creek Gem Mine (Little Gem), where you can buy a bag of dirt, sit at a flowing water sluice, pour it into a screen box, and shake to reveal gems, fossils, arrowheads, and other treasures, which can be identified from handy cards that are supplied.

“There’s always the question, ‘Are we going to get anything?’” Matt said. “But people are always blown away, completely surprised, at how much they get. 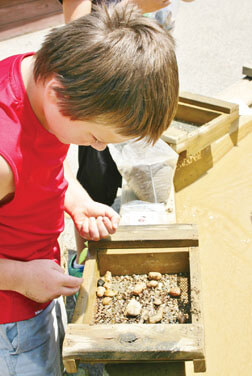 “The kids absolutely love it, and what happens, the kids start saying, ‘Look at this!’ and the parents are all of a sudden back in there buying bags for themselves.”

The Little Gem is open until the water freezes and opens back up when it thaws.

“I’ve seen a lot of gem miners sitting out here in the snow,” Matt said.
The Grays contract with a father-sons team that go to 14 different mines to get material and mix the mining dirt from all the different ones to give “a plethora of different rare and unusual things that they find.”

Customer/prospectors buy different sized bags of mining dirt with various things inside, according to what they’re mining for; there are small bags, large bags, bags with gems or minerals, fossil bags; there’s one bag Amy dubbed “Mother Load,” because it’s so heavy to carry.

“That one has pretty much everything in there,” he said.
Out of the success of the gem mine store, the Brown County Rock & Fossil Shop was born.

“People would come and say, “This is great, is there a rock shop around here?’ It was sort of by public demand that we decided to do that.”

Fortunately, he had a friend who was the guy who sells to the people that sell to the rock shops, so they jumped right in.

“We just loaded up on what would give us a wonderful rock shop right from the get go. And we’ve never looked back,” said Matt.

Now, the couple travels to different places to buy specimens for their shop, including the World Gem and Mineral Show held each year in Tucson, Arizona. Last year, they brought back 5,000 pounds of specimens.

“It’s a fantastic show; it’s actually 50 different shows that all converge on the Tucson area all at the same time,” Matt said. “Anything of note, of beauty, of rarity that’s been found in the earth in the previous year, is pretty much going to be in Tucson.”

“It’s just a really fun business to be in, to go exploring. We also go ourselves, to the quartz mines in Arkansas, we actually go and dig at different places and find things ourselves.”

By going themselves and bringing back their own stock, they cut out the middle men and bring the finest of what can be found into their shop. They can offer it much more affordably than a lot of rock shops can.

“We’ve got gems, minerals, crystals, fossils—really anything that comes out of the earth. Everything that you can think of, we have.”
Goniatites, Moroccan geodes, calcites, shark teeth, lead quartz crystals, smokey quartz crystals, petrified wood, tigers eye, Tranka geodes, amonites—minerals and rock formations of every variety are to be found there.

They sell geodes they collect locally, along with geodes from Africa, Brazil, and all over the world

Probably the most impressive piece in the store is a 500-pound Brazilian geode that’s been split in half to reveal fantastic giant purple amethyst crystals.

Matt said he and Amy are partners. “We find everything together and we run the business together. We also have the Iris Garden Cottages and Suites. We do everything as a partnership. I have friends that say, ‘You mean you work with your wife all the time?’ I wouldn’t have it any other way.”

It seems like a case of recognizing a real treasure when you come across it.