Thousands of dancers across the nation know it’s hip to be square.
Or dance that way, at least.

Brown County’s Bucks & Does Square Dance Club, Inc. will celebrate its 50th anniversary in 2020, and some of their members have been dancing even longer.

“They say square dancers live at least 10 years longer than average!” said Bucks & Does treasurer Betty Richards, who is nearing 30 years with the club.

A square dance is comprised of groups of eight dancers arranged in a square, all facing the middle. The various square dance movements are based on steps and figures used in traditional folk dances. Dancers learn basic movements, each with its own distinctive call, but do not know in what order they will be called.

Nashville’s club was launched by a small group who met in 1969 at Brown County State Park. While pondering what to call themselves, deer wandering through the park provided inspiration, and the Bucks & Does were born. 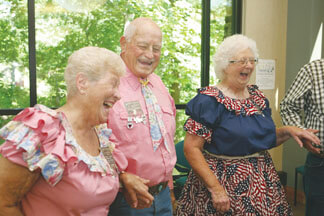 From left: Beverly and George Lockhart, and June Krebbs.

Today, don’t be fooled into thinking the members’ primarily retirement-aged status suggests anything about the pace of this sport. Most members dance as late as midnight or 1 a.m. at the club’s dances on Fridays throughout the summer, and many travel to do it all over again with nearby square dance clubs on Saturdays.
Bucks & Does will host dances from 8 to 10 p.m., or likely much later, on Aug. 3 and October 5 at the YMCA, 105 Willow Street, Each dance costs $10 per visiting dancing couple, and spectators are invited to enjoy the club’s potluck dinner and watch the dance for free. The admission charge to dance includes lessons beginning at 8 p.m.

The club also will host free dances open to all ages from 8 to 10 p.m. July 13 and Aug. 10 at the Abe Martin Lodge inside Brown County State Park. Park gate fees apply.

Charlie Johnson, who has been square dancing since the 1950s, leads many of the Bucks & Does dances on the mic as caller, prompting dancers to their next moves and also entertaining the crowd. “Once you get me on the mic, I’m like a Baptist preacher—you’ve got to beat the mic away from me,” he said, laughing.

Johnson teaches two levels of square dancing: a more basic “mainstream” style, and the more advanced “plus level.” He said a couple motivated to begin learning square dancing and master all the movements through the plus level could pick it up in about six months of lessons.

The club is always eagerly accepting new dancers, and Johnson said children as young as five or six years old can pick up the steps easily.

That made Charles and Linda Hestand wonder whether square dancing might be the perfect way to exercise and socialize after retirement. “We knew we didn’t want to sit at home in front of the television,” said Linda, who now serves as a board member for the Bucks & Does. “And now, we absolutely love to come dance. It is really a lot of fun!”

Johnson chuckled, noting that one of his favorite songs to start dances with is “I Don’t Need Your Rocking Chair.”

Betty Richards laughed, admitting that part of her passion for square dancing is the frilly fashion. She guessed that her closet holds about 60 complete outfits —dresses, skirts, petticoats, shoes—and don’t forget the matching bloomers.

But these square dancers have a serious side, too. Throughout the past five decades, the Bucks & Does have danced to benefit Brown County schools, to entertain crowds at the county fair, in area parades, nursing homes, and much more.

The Bucks & Does also have traveled by plane, train, and everything in between to attend state conventions, national conventions, a tour through Europe, and even a few cruises.

The friendships that have been fostered over the years are irreplaceable, said club President June Krebbs, who has been dancing since 1978.

Club Vice President Beverly Lockhart said she’s never met a more kind or honest group of people than the square dancers she’s met from across the U.S. “There aren’t many other places anymore where you could put your handbag down, leave it all night, and it will still be there when you get back,” she said with a grin.

Ruth Johnson, Charlie’s wife, witnessed the love and support of their club first-hand when the Bucks & Does secretly planned a dance and raised $1,500 for the Johnsons’ granddaughter, whose husband was killed in April. “People from everywhere came,” Ruth said. “I was in tears. It’s just love.”

The Johnsons said square dancing is one of the best things that’s ever come into their lives.

“It’s our life, our family,” Ruth said. “They’re there for you through everything.”