There’s a lot of energy emanating from Cox Creek Mill, and only a part of it comes from the fourteen-foot water wheel there that Brad Cox fabricated himself. For Brad and his wife Stephanie, who own and run their artisan ironworking business out of the mill house, big ambitions are a way of life—and the energy they put into realizing them could power the entire county.

When I arrive at the Mill, deep in the woods just off Salt Creek Road, Brad’s in full multitasking mode. He’s been with a video documentary team all day, showing them his welded works of art on the property and around Nashville. He’s also in the process of packing up for the Talbot Street Fair that weekend in Indianapolis, where he’ll show his work—as he does several times a year—across the country. Brad pauses for a few of my questions, disappears to tend to his next task, then circles back to me. This is normal, Stephanie tells me. “None of us likes to stay still,” she says with a laugh. “We all keep busy all the time. Our TV’s never on.” 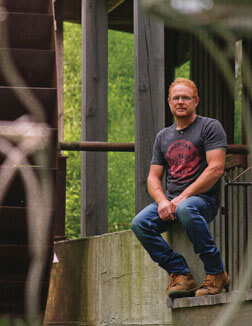 The couple followed their dream to Brown County from Northwest Indiana nearly twenty years ago, when Brad realized his job as an industrial welding foreman was taking him away from his family. “I had two boys and a wife, and I’m traveling for days at a time, missing their ball games, missing family time, and I would just get a knot in my stomach every time I had to leave home,” he says. Having spent many summers in Brown County since his childhood—his extended family owned property and businesses here—Brad knew just the setting for a major life change.

“Once I’d get off the highway and get over the hill into Brown County, I wouldn’t even think about what was in that rear-view mirror,” he says. “I’ve been all over the United States multiple times, and there’s nothing like Brown County. It’s like being in a whole new state of its own.” Brad had experimented with welding creative pieces on his own in years past and felt the urge to jump into art full time. But, as he says, “Talking about achieving your goals is easy. Doing it is the hard part.” Nevertheless, he and Stephanie made a plan, opened their business, and held their breath.

The community response was positive, and Brad’s creations became a welcome addition to the creative landscape around Nashville. His work in welded metal featured everything from insects to trees to trellises, many fashioned from the materials of industry and domestic life: bolts, hand tools, frying pans, gears. “I keep a lot of that stuff around, and sometimes it’ll sit there until I need a good idea,” Brad says. “Then all of a sudden I’ll look over, and something I hadn’t thought of will work real well with what I’m working on.” Soon his work could be found at places like Nashville’s Big Woods Brewing Company and at various outdoor spots around town. 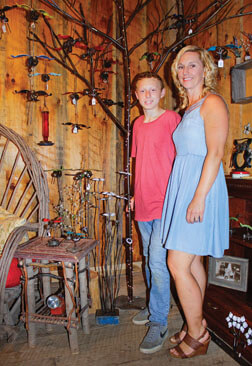 Briar and Stephanie Cox in the studio’s showroom.

A few years in, Brad got another big idea: to open a new location. After the site for the Mill was chosen, the Coxes got down to work, clearing a spot among the trees and vines of the thick forest there. Initially the idea was to house Brad’s studio and the store inside the Mill, but it soon became clear that the property was the ideal place to live as well as work. So Brad altered his design, and the soon the space above the storefront became the family’s home, with Brad taking his work space to an out-building he put up next to the Mill. It’s worked out great, with a showroom visitors can browse for unique items for themselves and others. “There’s something for everybody here,” says Brad. “I’ve got over 150 designs now—yard stuff, wine-related items, horse-related items, functional and ornamental stuff for the home. It’s made by hand and you can’t find anything like it anywhere else.”

The family’s work ethic has also rubbed off on ten-year-old Briar. Of the three boys in the family, he’s the only one left at home, but he keeps busy. In addition to the geodes and lemonade he sells, the jewelry Briar makes is on display at the Mill, and he even does a live magic performance for visitors (I still can’t figure out how he knew which card I picked. Every time.). “He kind of lives a rock star life,” Brad says. “His friends always ask him what it’s like to live next to a water wheel and a pond, and get to travel to all these art shows, and he just shrugs. It’s all he knows.”

Stephanie agrees that life at the Mill can be unconventional at times: cell reception can be spotty, and when the creek is up, the family has to stock up on groceries and stay put—there’s no crossing the bridge to the main road. But she says she wouldn’t have it any other way. “We love it here, and we love having people come out to see what we’re up to,” she says.

For Brad, it’s all about doing his part to add to Brown County’s distinct charm and flavor. “You can build structures and businesses in any town,” he says, “but you can’t fabricate personalities. It’s the people you’ll find here that will really inspire you to get lost in the experience of Brown County. I hope that’s what our place does for people.”

Cox Creek Mill is at 4705 Annie Smith Road just east of Nashville. It is on the Back Roads of Brown County Studio tour happening the entire month of October. Most studios on the tour can be visited year round.

Advance notice of your visit is appreciated since the Cox family travels to many art shows around the country. Contact the Mill at (812) 988-6690 or <theirongatebybradcox@yahoo.com>.