Jon Kay thinks a lot about community, culture, aging, arts, and the inevitable connections between them.

As director of Traditional Arts Indiana, the Nashville resident has interviewed African drum makers, woodworkers, hoop net makers, blacksmiths, weavers, musicians, and dancers, among countless others. For his latest project, he is focused on artists in an 11-county region, including Brown County.

“The arts are the soul of a community or group,” he said, affecting the quality of place, quality of life, quality of a community.
But the modern world has sold our soul in so many ways, he said, and TAI is working to identify people who are striving to be “cultural hubs” and supporting them to make it easier for folk arts to survive and spread. Folk artists are “hidden in plain sight” in many communities.

“It’s about the past,” he said, “but it’s just as much about our investment in the future and on whether we want a world based on capitalism or one based on community, family, and cultural practices that connect people to the past and the future. It’s about a continuity of self.”

Traditional folk arts, he said, have two realms. One axis comes from the past and goes to the future. The other is about what communities and groups do in social situations, using art to connect with others and support them emotionally, communally, and physically. 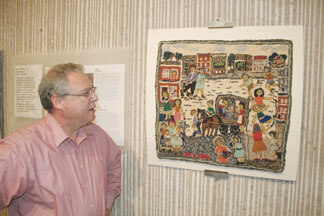 A recent national study ranked Indiana near the bottom—46th out of the 50 states—for quality of life among older adults.

Brown County is distinctive because it has the oldest average age in the state. The county is what social scientists call a “naturally occurring retirement community,” with resources such as the public library and the YMCA and its “Silver Sneakers” exercise program to support it.

But three plagues of aging are isolation, boredom, and feelings of hopelessness, he said.

“Folk arts are an antidote to all three,” Kay said. “People want to share.”

The survey of aging folk artists, now in a fact-finding phase, is scheduled to begin this fall, and is designed to find elders skilled in traditional crafts, music, or other areas and pair them with other older adults to improve the quality of life for all involved. Counties included in the survey are Brown, Orange, Greene, Martin, Daviess, Crawford, Washington, Dubois, Monroe, Owen, and Lawrence, an area Kay calls the “uplands.” Folklorists will be assigned to survey each county.

In the introduction to his 2016 book Folk Art and Aging: Life-Story Objects and Their Makers Kay says, “I explore how older adults use fork art, specifically material forms of life stories, as a strategy for coping with some of the difficulties they face as they age.

“Often deployed to express their personal or cultural identities, these distinctive objects also help maintain and forge connections with family and friends, and assist in distilling and telling their own meaningful life stories.

“Although some people make art throughout their lives, many gerontologists recognize that old age is often the creative age.”
The Mathers Museum of World Culture has a current exhibit on “Creative Aging” which includes a scale model of Brown County resident Bill Root’s boyhood home. Root worked on the model while participating in the Indiana State Fair, a venue Kay has used to find folk artists. The museum’s website says the exhibit, which Kay curated, shows how some elders use their creations to assist in recalling and sharing important life stories and are often part of social interactions or storytelling events. Among other artists in the exhibit are Columbus woodcarver Bob Taylor. The exhibit runs through July 27.

Kay, 51, was raised in southern Brown County, attending Nashville Elementary and Brown County High School before enrolling at Indiana University, where he is now a clinical associate professor in the Department of Folklore and Ethnomusicology. He dropped out of IU a couple of times before graduating with a degree in general studies, and played music as a side career. He finished his IU degree in 1994 and got a master’s in folk studies at Western Kentucky University, followed by a doctorate in folklore from IU in 2014, which has one of the premiere folklore departments in the U.S. 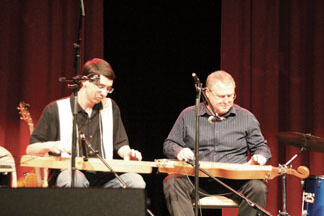 Zelton Kay performing with his father at the 2017 Youth Music Showcase. photo by Cindy Steele

He worked at the Florida Folk Culture Center at White Springs, Florida, and directed the Florida Folk Festival before returning to Indiana. He was named director of Traditional Arts Indiana in 2004.
Kay and his wife, Mandy, have a son Zelton, who recently participated in National History Day in Washington, D.C., and was named winner of the best overall History Day project from the State of Indiana.