After opening a science kit for Christmas when she was six, Kathy Sparks became convinced she could create potions.
She’s spent the rest of her life doing just that.

Everything from dandelions and violets to walnuts and insects serve as the base for dyes she concocts in every color of the rainbow. And what Kathy weaves is just as natural and varied—wool folk-art style hooked rugs, sweaters made of yarn she’s spun from the coat of her Angora rabbits, and baskets from material she makes herself from brown ash trees harvested in New England.

“I just realized at some point that so much in this world is destroyed before we recognize its true value,” she said. “My work is not so much about earning a salary but hopefully sharing something about the past that will carry into the future.” 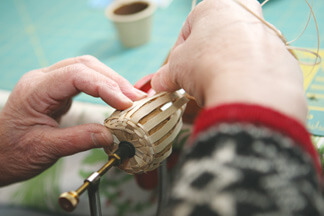 In high school, the Hoosier native moved to Belgium with her family. She returned to the U.S. to earn a degree in natural resources and environmental science from Purdue University. Kathy next followed her husband, Tim, and his job with the Navy. She earned a teaching certificate from University of West Florida and later a master’s degree in dye chemistry from Western Washington University. The next 29 years were spent teaching students in middle school through college in Washington state and at Ivy Tech Community College at Columbus in subjects including anatomy and physiology, chemistry, Earth science, biology, and natural science.

Kathy’s mind is thirsty to understand how things are made and their role in nature. Her words move fast when she talks about the years of research she’s done across five continents, diving deep into the history of weaving.

One of her passions is replicating precisely-formed baskets that date back to the 1800s in the Shaker or Taconic styles. No one sells the materials Kathy uses made of brown ash—the Rolls Royce of weaving—so she spends weeks each year helping cut trees in New England, hammering them to separate the growth rings into long coils, and finally soaking, sanding, and sizing the materials she soon will weave. The finished products are stunning white baskets that, over time, will age to a fawn brown.

Tucked behind the baskets Kathy proudly displays in her studio are vibrant strands of fibers, twisted and labeled, that represent 35 years of research in natural dyes. She breaks from her quiet, humble demeanor to share, smiling, that upon seeing most any Hoosier flower or weed, she can accurately predict the color it will produce in a dye pot.

Along with preserving historical weaving and dyeing techniques, Kathy also continues the centuries-old art of traditional rug hooking. It was a craft that originated in England as a pastime of the poor to turn leftover scraps of cloth into intricate images. Her folk-art style rugs and tapestries depict everything from farm animals and barns to flowers and geometric shapes.

Kathy has shared her weaving expertise as an instructor at workshops throughout the U.S. and in more than 100 magazine articles and two books, including “The Song of the Muskox,” which explores the history of the animals and the use of their fur as weaving fiber. The book was the result of Kathy’s graduate studies work and travels in the 1980s to the Northwest Territories of Canada, teaching and encouraging native Inuit women to produce garments, and thus income, using yarn from muskox. Fourteen years later, Kathy was shopping in a Jacques Cartier store in Canada that sold high-end locally produced art, when she found a beautiful cowl for sale that had been knitted by one of the women she had taught.

“I knew we had accomplished what we had set out to do,” Kathy said. “The system worked.”

When she isn’t weaving, dyeing, or teaching, Kathy hustles to tend to the farm, which she and Tim share with four dogs, three ducks, three rabbits, occasionally two grandsons, and eleven Connemara ponies that she and the couple’s now-grown daughter once bred and showed.

She and Tim also welcome seasonal guests into their home, which they built 22 years ago as a bed-and-breakfast, the Slippery Elm Shoot Inn. Nestled in the woods a half hour away from Nashville, the inn attracts clientele seeking solace and nature.

“It’s just one more way we love meeting people and sharing our little bit of this world with them,” Kathy said. “I suppose my whole life, in so many different avenues of meeting and teaching people, has been about finding common threads.”

Find Kathy on Facebook at The Hand Maiden or visit <slipperyelmshoot.com>.