~story and photo by Bob Gustin

From opening a stylish new visitors center to breaking ground for a new 2,000-seat performing arts venue, change is in the air for tourism in Brown County.

“I think 2018 is going to be one of those pivotal years,” said Kevin Ault, president of the Brown County Tourism Commission. “We’re starting to build.”

“It will be a year of networking,” said Brown County Convention and Visitors Bureau Executive Director Jane Ellis.

The CVB moved from a central spot in downtown Nashville to a “gateway” position on the village’s south side, near the intersection of State Roads 46 and 135, and greeted the community during a February grand opening.

Ellis believes the new location at 211 S. Van Buren St. is ideal, since it is close to where most visitors enter the village, coming from either Columbus or Bloomington, has more accessible parking nearby, and was designed for the specific purpose of being a visitors center.

The old location of 10 N. Van Buren St., across from the Hobnob Corner Restaurant, was a more generic space “we grew into,” Ellis said. The new location has better flow and design with more open space. One of the first things a visitor sees when entering the center is a large touch-screen monitor opened to the CVB website, which provides a self-guided tour of Brown County attractions.

The lease for the new space, a former Circle K gas station building which was completely renovated, is $3,350 per month for about 2,800 square feet, compared to the $4,000 the CVB was paying for 4,000 square feet in its old location. Ellis said the old location needed maintenance and upgrades. A committee was formed and recommended the move. Ellis said the new location was preferred and was available. 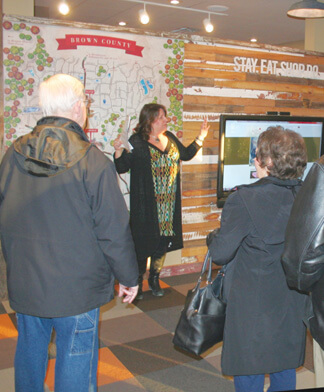 Jane Ellis giving a tour at an open house in February.

“It’s absolutely phenomenal,” Ault said. “I think it really portrays Brown County.” Among its attributes, he said, is the use of up-to-date technology, such as the big touch screen, which appeals to younger visitors.

The main lobby has multi-colored carpet squares, large stylized maps of Nashville and Brown County, wall-sized photos featuring things to do in the county, a media room, and a small gift shop featuring hats, shirts, and other items. Native and some vintage lumber was used for woodwork and trim in the center.

The CVB is funded by the innkeeper’s tax, the 5 percent charge added onto lodging bills in Brown County for any accommodation of less than 30 days in a structure with indoor plumbing. Last year, that brought in more than $844,000. The local Tourism Commission, which oversees the CVB, keeps 5 percent of the total, and the rest goes to the CVB to promote tourism. Earmarking $100,000 from last year’s budget meant a decrease in paid advertising, which the CVB staff tried to offset by focusing on social media.

Gone from the CVB lobby is the rack of local business brochures. Instead, the CVB is hosting business information on its website without charge. Business used to pay $95 a year for a spot on the website. The new system is more ecologically friendly, Ellis said, and easier for CVB staff, since they don’t have to monitor which brochures need to be restocked.

A new approach will be instituted this year as the CVB tries to “elevate the destination” of Brown County and work to attract a younger demographic. That includes working with the Brown County Chamber of Commerce on a long-term vision of networking and attracting more business travelers, including weekday visitors.
“There is a very exciting energy of change” in the air, Ellis said. “People are invested in the community.”

Much attention is focused on the proposed Maple Leaf Center, a 2,000-seat venue with adjacent parking, being planned on Nashville’s east side.

Planning for the Maple Leaf Center got under way last year, when 14 acres behind the city police department building were purchased for $2 million. Brown County government took out a $12 million loan for the project, with funds from the innkeeper’s tax going as collateral on the 30-year loan. Traffic to and from the center will be served by a new three-lane road to be constructed east of the retail complexes, which include McDonald’s restaurant and Family Dollar.

Although the CVB is not responsible for Maple Leaf, both come under the jurisdiction of the Tourism Commission. The concert venue will have its own management group and executive director. Officials hope Maple Leaf will make the annual $550,000 loan repayment from its revenue, making use of the innkeeper’s tax unnecessary.

Ault said he believes Maple Leaf will be self-sustaining.

“I truly think it will pay for itself, put more money in the community, and not take away from the innkeeper’s tax,” he said.

But Ellis said, if necessary, the CVB is extremely resilient, and can work within reduced budgets. Ault agreed, noting increased social media presence and non-paid marketing as options.

Ellis said officials believe Maple Leaf will draw customers from a wide region, and the booking firm Live Nation will arrange 20 to 25 nationally recognized shows a year, with another 70 shows featuring regional artists. Many tickets will sell for $50 or less and national acts, which may be included, range from the Beach Boys to the Oak Ridge Boys. The lobby of Maple Leaf will promote other Brown County attractions.

But Ellis said the CVB will continue to promote the arts, dining, outdoor activities, and other attractions that bring visitors to Brown County.

“I don’t want anybody to think we’re choosing one thing over another,” she said. “We want to keep the conversation open. It does neither the CVB nor Brown County any good to pick and choose.”