Skip to content
Suzannah Zody’s Journey to the Playhouse

Suzannah Zody’s Journey to the Playhouse

Suzannah Zody’s love of performing arts has taken her around the globe. Her latest adventure, however, is back in her hometown of Nashville, as executive director of the Brown County Playhouse.

Suzannah graduated from Brown County High School in 1979 and left for Purdue to study theater. After three years, she went to the University of Illinois in Chicago to study communications.

“I never graduated. I got bored,” she said. “Instead, I just walked in the doors of the Goodman Theater, one of the biggest, most award-winning theaters, and said ‘Can I have a job?’”

She got a job, a terrible job in her words, answering phones and doing ticket sales, but it was a start. Over the next several years she worked her way up at the Goodman, eventually becoming director of season tickets. She even got to interact with a few of today’s biggest stars. 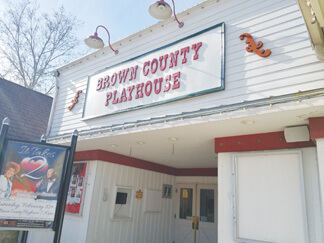 “There were huge stars in the shows there. Celebrities can be in their own world, but that’s just part of the business,” she said. “I met James Earl Jones, Sigourney Weaver, Kevin Kline and many more. Kevin Kline even has a connection to the (Brown County) Playhouse. As a student at IU, he performed here.”

After four years as director of season tickets at the Goodman, Suzannah accepted a job as assistant marketing director at Northlight Theatre in Evanston. At the same time, she also worked as an independent consultant, helping new theater companies produce shows in various spaces around Chicago.

“There is never a dull moment in theater. It’s stressful but also very exciting. That’s why I have always loved working in performing arts,” she said.

In the midst of getting her career going, Suzannah met her husband and the two decided to move to London.

“I landed there with no job and no contacts. I was starting from scratch,” she said. “But, luckily, I fell into a position at Galathea Systems. That’s when things got really exciting.”

“It was very exciting work. I traveled all over the world and I swear I’ve seen every inch of England,” she said, laughing. “Our company sold the very first ticket on the internet. I think back to how slow and non-functioning it must have been, but we were excited. We even beat out Ticketmaster.”

Another day, however, stands out as her favorite memory.

“I was sitting at my desk at work and got a call. It was the Queen’s computer manager. He said they needed our help,” Suzannah said. “They wanted us to install computers and software at Buckingham Palace.”

The Queen had decided to open Buckingham Palace to the public for the first time and they needed a computer networking system for ticketing and security.

“The first thing I had to do was sign a massive confidentiality agreement,” Suzannah said. “It was very exciting to go in there. We surveyed rooms, many of which have never been open to the public, to decide where to install the computers.”

While most of the work at the palace was thrilling, one day was incredibly sad.

“We were scheduled to work the day after Princess Diana died,” she said. “Everyone was very sad that day and there was just a sea of people out front grieving for her.”

The contract with Buckingham Palace led to other contracts with royal connections at Windsor Castle, Westminster Abbey and Holyrood Palace.

And while her work with royalty and the global travel was thrilling, it was also exhausting. After 12 years in London, Suzannah and her husband decided they were ready for small town life.

“I’m not a big city girl at heart. I thought, “If we’re going to move to a small town, we might as well move to my small town,’” she said. “Both sides of my family have lived in Brown County since the mid-1800s.”

So, in 2002, Suzannah moved back to Brown County and took a job with her family’s real estate company, Hills O’ Brown Realty, where she worked for the next eight years.

“I saw this as an opportunity to help my community. I worked six days a week for 18 months as an unpaid volunteer. This place was essential to the community. It needed not just to be saved, but improved,” Suzannah said.

IU pulled out at the end of 2010 and by mid-2011 Suzannah and the board had the Playhouse up and running.

“We made some horrendous mistakes and we had some real successes,” she said. “We knew we needed to change the formula, but we just weren’t sure how yet. People seemed to appreciate that our work and our intent were good. We knew it was show business, and in show business you will never always get it right.”

Audiences started small, but interest grew each year, and in 2017 1,800 people attended the annual Christmas show.

“People are getting more informed about who we are and what we offer,” Suzannah said. “I think we’re a lot closer to that formula that works.”

Five years ago, the Playhouse invested in state-of-the-art movie equipment and shows current and classic films every weekend.
“I think that really filled a gap because there is no movie theater in town,” Suzannah said. “Our goal now is to have either a movie or live show Thursday through Sunday year-round.”

In 2017, the Playhouse hosted more than 350 shows, which included movies, musical theater, and live music.

“Our goal is to continue to provide entertainment that is artistically vibrant, high quality and diverse,” she said. “We are going to try new things every year so that it never gets dull or boring. “

To learn more about the Brown County Playhouse and to view a list of upcoming shows, visit <browncountyplayhouse.org>.