Spring is already a month old as I sit here, staring out my window at the falling snow. Now, you might think that this weather set-back would set back my otherwise warm and sunny disposition—and you would be right. But the aroma of bean soup wafting from the kitchen brings to mind fond memories of the Tuesday evening bean suppers over at the Bean Blossom Bluegrass Festival. Those bean suppers are a tradition at the festival.

Traditions are important. They connect past with present. The Bean Blossom festival is built around traditions established by its founder, William Smith Monroe, the father of Bluegrass music. Other traditions include parking lot pickin’, wherein, if you’ve got an instrument, you can get together with any of the other eleventy-hundred folks at the festival and create your own band. But you might want to sharpen your chops at one of the instrument workshops first. And you surely won’t want to miss the “Bill Monroe Sunset jam.”
Or maybe you’re kinda young and new at Bluegrass; in that case you could join the youth Bluegrass boot camp. That’s where designated artists/teachers whip a bunch of whippersnappers into shape on their banjos, guitars, mandolins, bass, and fiddles. And when the kids are all playing at the Bluegrass Boys level (or close enough) they get all the young’uns on stage to show off what they’ve learned. It’s another example of carrying on tradition.

Topping the Bluegrass acts this year is Mr. Ricky Skaggs, a 15-time Grammy winner, who as a child was inspired by Bill Monroe to take up the mandolin. Monroe called “Little Ricky Skaggs” up on the stage at a performance in Martha, Kentucky and let Skaggs play his mandolin. By the age of seven Skaggs earned his first paycheck playing with Flatt and Scruggs, and as a young man performed with Bluegrass legends Ralph Stanley and J.D. Crowe. He led the country charts during the 1980s. In 1997 he created his own record label and has been performing with his band Kentucky Thunder ever since.
This year there will be somewhat of a departure from the established Bluegrass music conventions with the addition of “Asleep at the Wheel” to the roster. As many of you probably know, they are not Bluegrass but western swing. Bill Monroe always liked fiddle music and the band offers plenty of it.

There are nearly 60 more acts on the lineup including old favorites such as Bobby Osborne and The Rocky Top Express, The Seldom Scene, Special Consensus, The Grascals, and Karl Shifflett with the Big Country Show.

Check out one of the official flyers to see the complete lineup.
The festival runs eight whole days, from June 9 through June 16. That’s what it takes to show you all that talent.

Now I expect you, who might want to stay for more than one day, may be wondering about accommodations. Never fear, the Bill Monroe Memorial Music Park has its own campground. It boasts of more than 300 sites with water and electric hook-ups, 15 log cabins for rent, 400 more primitive tent sites, laundry facilities, restrooms and hot showers, a camp store, a gift shop, and a stocked fishing lake. The camping is fun whether you do it in a land yacht or a pup tent because you are moving into a neighborhood already made up of Bluegrass fans. 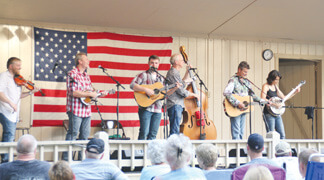 So, you’ve got some of the best music this side of “Hillbilly Heaven” and great accommodations but Bluegrass fans can’t live on music alone. You’re gonna have to eat at some point and most people bring some food with them. Now don’t forget, you have a free bean supper if you are at the park on Tuesday evening and free ‘mater samiches’ on Friday courtesy of Junior Sisk.

But aside from that, the festival has one of the best vendor areas in the world. You can get barbequed ribs, fried green tomatoes, burgers and hotdogs, Northern Pike sandwiches, ice cream, kettle corn, and more. If you’re not careful you can accidently gain a few pounds, I know, but it is worth it.

There you have it—great music, good friends and neighbors, comfortable camping, mouthwatering vittles. All-in-all a relaxing time be it a day or the whole week. If you are already a Bean Blossom regular, then I’ll likely see you there. If you haven’t experienced the festival yet, I hope you show up—it just might become a tradition.