Imagine a world without honey bees. Sure, you’d have to find something else to sweeten your tea. But if you love fresh fruits and vegetables, or the delicate beauty of spring flowers, the world would be a bleaker place indeed.

We could survive without honey bees. In fact, the pre-colonial Native Americans did just that. But the fact is that more than 30 percent of the food we eat is dependent on pollination by insects, and about 80 percent of that work is done by the honey bee.

A study at Indiana University reported that honey bees are the most efficient of the insect pollinators, working in at least 90 crops in North America and are adding more than $15 billion a year to U.S. agricultural products.

“We would have lots of corn, beans, breads, and cereals that are pollinated by the wind,” said Tony Gaudin. “But the world would be a much less flavorful place.”

And for Brown County resident and beekeeper Mike Bube, it would be a much less interesting place, too.

“I go out to the beehive and watch their activities,” Bube said. “I really feel connected, and the bees just seem to be a part of me.”

Gaudin, who lives in the Morgantown area, is a retired professor and head of the science program at Ivy Tech Community College in Columbus who also taught at California State University in Northridge, California. He’s a biologist and a beekeeper, and one of the founders of the southern Indiana Ten O’Clock Beeline Beekeeper Club. He calls it a “positive addiction.”

Gaudin has been working with bees as a hobby for more than 30 years. Like any hobby, it’s a challenge and people become immersed in it and it becomes a social activity, like golf, where members can talk to each other and exchange information. And the honey is his reward. 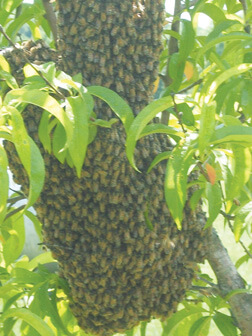 Honey bees are not native to North America. European colonists brought the first honey bees, where they thrived because they had no natural predators, Gaudin said.

Then, 50 to 70 years ago, an Asian pest called the Varroa mite was introduced and began destroying the bee colonies. While there were once many feral bee colonies, now there are very few, Gaudin said. And the increased use of chemicals has also damaged the bee population.

“Bees are not domesticated animals,” Gaudin said. They are wild insects, and people provide structures for them and encourage them to make it home. People also protect them from parasites.
In return, bees are essential to producing foods through pollination. For example, almond crops in California, Gaudin said, are 100 percent reliant on commercial beekeepers.

Through artificial selection, humans have developed strains of strawberries, apples, oranges, pears, watermelons, and other large-scale crops, which can only be efficiently pollinated by honey bees.
Bube has been interested in bees since he was a child, when he came across a wild colony in a beech tree while he was squirrel hunting.

“It was a massive comb and the experience just stuck in the back of my mind.” Later, he had a friend who kept bees and he decided to try it in his garden area.

“I just like natural things,” he said. While he once had three hives, he now has only one because of losses during the winter when the insects were affected by cold and dampness.

In 2015, President Barack Obama announced a plan to fight threats to honey bees, which include pathogens, reduced habitat, lack of nutrition, and exposure to pesticides.

In Indiana, 119 beekeepers participated in a study by the nonprofit organization The Bee Informed Partnership. The survey included 3894 bee colonies statewide, which experienced a 27 percent colony loss
over the winter of 2016–17.

Humans have had a long relationship with honey bees, and it has been beneficial for both species.

The first cave drawings of bees date back 13,000 years, according to biologist Noah Wilson-Rich, founder of Best Bees Co. in Boston. Around 2400 B.C., Egyptians began keeping bees in Egypt, on boats and barges on the River Nile for agricultural pollination.

“I could talk for days about the anatomy of a bee,” University of Maryland entomologist Dennis VanEnglesdorp said in a recent TED talk. “I think that one of the things that strikes me about bees is that you often think about evolution as being this competitive thing. But bees are a testimony that sometimes evolution occurs as a dance.
“We have flowering plants because we have bees, and we have bees because we have flowering plants. This evolutionary dance has created beautiful blooms. I mean, these were the first advertisements — the ultraviolet markings said to bees, ‘Come here and visit me.’ The flowers produce all this pollen and nectar for the bees to bring back.

“Meanwhile, the bees live in these social constructs that have evolved ways of existing so that they can find the flowers efficiently. The dance that’s occurred between flowers and bees—I find it awe-inspiring.”