The outdoor event features three stages of simultaneous performance over four days dedicated to the life and music of the late John Hartford, known to many as the fiddle-playing tour-de-force who influenced generations of American roots musicians, and to others as the godfather of the Newgrass movement.

As a lifelong disciple of the musical genre that came to be called Americana, Tom went to the Hartford Festival’s earliest incarnations as a fan. Blown away by what he saw and heard there, he was soon talking to John Hotze, the Festival’s founder and a former bandmate of Hartford’s, about how he could put his business background and organizing acumen to use for Hotze. Soon, the two formed a partnership, and Tom’s been busy ever since, scouting bands, doing promotions, selling tickets, and coordinating all the people and equipment involved at showtime each year.

But Tom’s no corporate promoter looking to make JHMF outgrow its beauty and purpose by appealing to the fickle tastes of the masses. Far from it. By capping festival ticket sales well below capacity and allowing people to bring in their own food and drinks, for example, he violates a cardinal rule of business (”Thou shalt squeeze every possible dollar from every possible customer!”)—which is A-OK by him. “We’re a for-profit business that doesn’t turn a profit,” he laughs, referring to his and Hotze’s partnership. “But John Hartford wasn’t about commercial success, he was about music, and that’s what we’re about. We want people to have the space to camp, to not be on top of each other, and to attract the audience that really appreciates what John’s music means.” 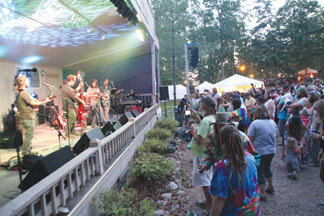 This approach even extends to the way Tom chooses the bands who will perform each year. “We strive to strike a balance with who we book,” he explains. “The common thread between all the acts is their love for John Hartford’s music, but beyond that we want some folks representing the old-timey sound, and some representing the newer musical directions. We like big national acts, but we also want to get a good number of performers from right around Brown County. And we always make sure women—especially bands fronted by women—are well-represented in the lineup.”

True to form, this year’s roster at the Festival has lots to offer fans of old-timey music, traditional bluegrass, Americana, roots, and all the subgenres and hybrids in between. Fans will recognize names like The Infamous Stringdusters, Darol Anger, and brother-and-sister duo Giri and Uma Peters—and get to know nearby acts like Ida Clare, Flatland Harmony Experiment, and White Lightning Boys. Each day of the Festival opens with an all-Hartford set, and professional musician Jeff Burke leads a hands-on Jam Camp Thursday, Friday, and Saturday for players who want to join a jam session but don’t know where to start.

So far, Tom’s philosophy (or is it John Hartford’s?) has worked well: ticket sales continue to be strong every Festival (the first two pricing tiers for this year are already sold out), and about 40% of the audience travels over 200 miles to attend. But Tom measures success in a different way, he says. “I’ll walk through the camping areas in the middle of the night, or stop by one of the organized jams, and there are just dozens of musicians who don’t know each other having a blast playing together. Or people who are Hartford specialists will share their knowledge about his life and music. Or bands will perform Hartford’s songs onstage, and it’s just overwhelming. It always comes back to the way John Hartford lived and played.”

Key to JHMF’s popularity is its location. “I can’t think of a more ideal place to have this event every year,” Tom says. “I tried to set up a similar music festival one year, seventy miles outside of Nashville. It didn’t come close to attracting what this festival does. Brown County in general is beautiful, and with the bluegrass festival at Bill Monroe Park every year, Bean Blossom’s got a real musical heritage to it. So continuing to have the Hartford Festival there is a natural fit. The only negative might be that there’s just too much music to see it all every year.”

More information about the 8th annual John Hartford Memorial Festival, including ticketing for the event, can be found at <johnhartfordmemfest.com>.