The Pioneer Village is one of the “must visit” destinations in Brown County. Springtime brings school children to the cluster of log buildings, which represent bygone village life within the larger village of Nashville itself. Visitors are lucky to tag along with the youngsters and see the Brown County Historical Society’s gem through their eyes. A chestnut tree grows next to the blacksmith shop, recalling Henry Wadsworth Longfellow’s poem, The Village Blacksmith: “Under a spreading chestnut-tree/ The village smithy stands.” In another stanza children on field trips in 2018 mirror those of an earlier era: “And children coming home from school/Look in at the open door;/They love to see the flaming forge,/And hear the bellows roar.” Like days past, students can see square-headed nails and horseshoes being made as the hammer hits the anvil with an unmistakable sound.

The nineteenth century buildings are the perfect setting for visualizing the Little House books by Laura Ingalls Wilder. Especially pertinent to young Hoosiers is Portia Howe Sperry and Lois Donaldson’s children’s novel, Abigail, which is the story of a young girl, Susan Calvin, and her family as they homesteaded in Brown County in the days before roads were paved.

In a landscape of forested hills and valleys wild with bears, panthers, and wolves, many communities consisted of log homes such as the one next to the blacksmith shop. The exhibit of kitchen utensils around the hearth show how kettles of water hung on the iron crane, keeping hot water ready for the household; and footed iron skillets and Dutch ovens set upon the stone hearth providing slow-roasting meats and breads. The rope bed has a straw-stuffed tick for a mattress and brings to mind the origin of “Sleep tight, don’t let the bedbugs bite.” Next to the bed is the family Bible with all births, deaths, and marriages entered, and recognized as legal records when needed. Children visiting this cabin especially wonder at the need for water, fuel for warmth, shelter, and food as settlers chose homesites long ago.

On the northeast corner of the Pioneer Village stands the authentic medical office of Dr. A.J. Ralphy, a native son of Nashville and born in 1854. The small white clapboard building was moved from New Bellsville in 1976 and restored to its original condition with medical books, instruments, furniture, and even specimens of Ralphy’s taxidermy. 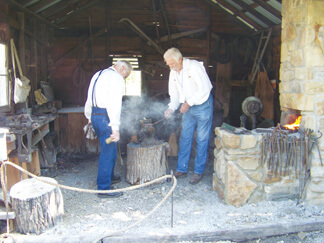 A prominently recognized landmark of hand-hewn log construction is the massive log museum. With some logs measuring 60 feet in length, there are two rooms at either end, a dog-trot passthrough, and a loft spanning the entire length. The story goes that the building was discovered in the early 1930s by James Voland while rabbit hunting on a farm in Jackson County. The building had been used as a barn and was showing signs of neglect. Voland was able to purchase it from the Indiana Trust Company in Indianapolis, trustees in a bankruptcy proceeding. With the help of Oral Voland in marking the logs for reassembly at its current site, the reconstruction of the old barn was one of many local Works Progress Administration (WPA) projects. Height from the foundation to the bottom of the floor joists of the second floor is 9’10”. Fireplaces and chimneys of native stone were added at each end of the building during reconstruction by the WPA. An entry in the Brown County Archives states that James Voland sold the building to the Community Club “as is where is.” In 1954 an amendment to the deed allowed the Community Club to use the building for meetings by various community groups.

Markings on the floor of the upstairs indicate that shuffle board was enjoyed. When the Community Club ended in 1960, the deed was passed on to the county commissioners. Records indicate the Brown County Historical Society received ownership in 1974. Students of Chris Todd’s Brown County High School building trades class worked to restore the building for its new role as a museum depicting Brown County history. Where replacement logs were needed, students cut timber from a local farm and hewed the logs using antique tools provided by members of the Historical Society. 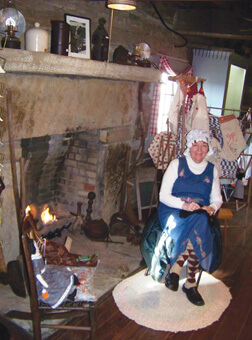 Today, exhibits and demonstrations in the Loom Room show the processes from flaxseed and sheep to linen and wool yarns. On display are many spinning wheels: a walk wheel or great wheel for wool, and Saxony and German wheels. The barn loom is worn smooth by the many hands that have woven rugs or coverlets over the years. To measure yarns for weaving, there is a niddy noddy and a clock reel, also called a weasel, (as in Pop! Goes the weasel!) Natural dyeing techniques are part of the display.

Part of the museum complex—the old log jailhouse—lies just northeast of the courthouse and was constructed in 1879. It replaces the original jail that was built in 1837. The two-story log jail cost $1500 to build and consists of walls of two layers of logs laid horizontally a foot apart, with vertical boards between. Tight quarters, the rooms are twelve by twenty feet, with extremely low door jams requiring bowed heads to enter. Records show that men were kept on the bottom and women upstairs. The pot-bellied stove and stovepipe provided the only heat. Double iron doors had Dutch-type inner doors, with the top providing the passing of food and wood for heat.

The Pioneer Village is open to the public, typically on weekends May through October from 1 to 4:30 p.m. and other times by special arrangement by phoning (812) 988-2899.