Over time, generations of fine artists, artisans, and craftspeople have forged—and carved, and sculpted, and polished—Brown County’s reputation as a community of creativity and imagination. The works of art found in any number of our shops, stands, and galleries reflect the deep pool of talent at work here every day, their creators’ dedication and discipline abundantly obvious. But the paintings of Norman Ulery (1947–1976), many of which are housed at Red Shed Studio outside of Nashville, might be especially remembered as the truly original expressions of Brown County’s earliest “outsider artist.”

Though he was born and raised in northern Indiana, Ulery’s journey to Brown County was an indirect one. “When he was a child in Peru, Indiana, he would draw on every scrap of paper he could find,” says Normajean Macleod, Ulery’s daughter and the proprietor of Red Shed. “He had polio early on, so he didn’t get to be as active as some of the other children.” Polio also limited Ulery’s employment opportunities as a young man, so along with his wife Gertrude and little Normajean, he decided to follow his extended family in moving to Southern California in the early 1930s. 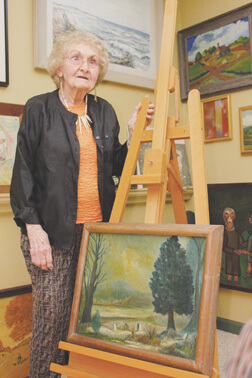 Self-taught and skilled in drawing and design, Norman soon found employment there through the Works Progress Administration, first as a silkscreener and then as a decorative tile designer and mural painter. At the invitation of a friend, Norman joined the Hollywood Arts Students League in Los Angeles, led by Herman Sachs, who was associated with the German Bauhaus movement and who later helped found the Chicago School of Design. It was during this period that Norman had a breakthrough: seeing Marcel Duchamp’s Nude Descending a Staircase in person left him awestruck, and forever influenced his understanding of painting.

Despite his artistic growth in California, after several years there Ulery longed to return to Indiana. Brown County was known as a haven for artists and craftspeople, so Norman didn’t let the fact that he’d never been there bother him—in 1947 he packed up his family and a few belongings and headed east, looking forward to life in a welcoming community of supportive creative peers. But life in Nashville didn’t quite pan out that way.

While his contemporaries in the Brown County of the 1940s and ‘50s focused mainly on realistic or impressionistic depictions of the people and natural beauty around them, in his highly personalized approach to his work Ulery drew upon the surrealist, cubist, and abstract expressionist styles he had fallen in love with in Los Angeles. “Nobody was interested in his art around here, and he was tolerated rather than accepted by the other artists,” says Normajean. “He belonged to the Brown County Art Guild for a while, but he was mostly all alone, painting by coal-oil lamplight in the original Red Shed, this little tiny building with no electricity or running water in it. He hand-painted signs around town, and my mother cleaned houses, just to get by.”

Lack of commercial success didn’t seem to bother Norman, though his work did eventually get the attention and respect of a few local collectors and fellow artists. Over the years, he just kept on painting in his own way, depicting abstracted figures with vivid colors and bold lines, until his finished canvases piled inside the shed. Ulery died in 1976, but it wasn’t until the early 2000s that Normajean discovered many of the paintings, and she decided to share them with the world.
Since then, Ulery’s paintings have been shown in private collections, galleries, and museums around the country. A finished new shed was built on the original Ulery property in Brown County, and earlier this year Normajean opened it as Red Shed Studio, where a few dozen pieces by Norman and other local artists are on display. But, staying true to Norman’s place outside of the established artists’ scene, Normajean doesn’t keep regular open hours at Red Shed, nor include it on the art tours popular in Brown County. “I want his work to be seen and appreciated, not just passed by,” she says.

The Red Shed is located just west of downtown Nashville, and may be visited by appointment only. For more information, call (812) 988-4792 or visit <redshedstudioart.com>.