Skip to content
Back Roads of Brown County Studio Tour

For the past 20 years, folks from across the Midwest and beyond have been driving to Brown County for the annual studio tour. It’s a chance to experience firsthand two of the area’s best-known attractions—breathtaking natural scenery and authentic arts and crafts. 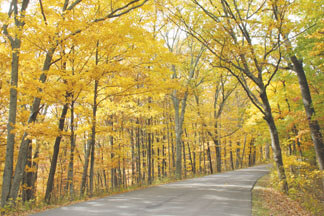 To celebrate the anniversary, this year’s free, self-guided tour features 32 artists at 22 studios around the county. Most studios are open 10 a.m. to 5 p.m. daily, but some have different hours. A brochure and map outlining specific details is available at many local businesses, the Brown County Visitors Center, or at <browncountystudiotour.com>.

The event began as a two-day studio and garden tour in June of 1999, and morphed into the current month-long October event. Now the artists share center stage with the dazzling autumn colors.
Special recognition is being given this year to four artists. Primitive painter Amanda Wallace Mathis was one of the founders of the tour, and this year her studio is hosting work by potter Larry Spears, jeweler Cheri Platter and stained-glass artist Anne Ryan Miller, all longtime participants.

Mathis’s studio is the only one which has been a stop on all 20 studio tours.

She is a primitive painter. Though she has painted in the impressionist style of well-known art colony painters such as T.C. Steele, she said she is more comfortable in the primitive style, and that’s what she does best.

Mathis believes that one thing which has made the tour a success is the fact that many of the working artists in Brown County live and practice their arts in rural areas.

“We need to keep the working artist in the forefront,” she said, “because that’s what’s going to keep us going. This (the studio tour) is one way we do it.”

Platter, one of the founders and a former president of the tour, said tour participants have had good and bad years, depending on the economy. But she said many artists demonstrate their craft during the tour, and visitors love to see where the work is done. Some artists allow visitors to participate in the making of the products.
She said pottery was her first love and Platter produced fine porcelain work for years, but her products evolved to silk scarves and finally to jewelry. A knee and two shoulder replacements led to the changes in her art form, since pottery involves heavy lifting for the clay and a complicated setup at shows.

“I went from mud to silk to silver,” she jokes.

Now she uses “metal clay” to produce jewelry. That’s a pure silver powder that is mixed with water and a binder, then rolled out, embossed and shaped, and fired with a torch or in a kiln. Many of the same skills she used as a potter transfer to the jewelry work.

Nature has always been the inspiration for Platter’s work. She painted leaves and flowers on her pottery and the same on her silk scarves. Now the same features show up in her jewelry.

“It’s a whole new life,” she said of jewelry making. Platter enjoys seeing minerals and stones in their natural state at gem shows, then seeing them transformed to jewelry.

Spears, a potter who was on the first tour and all the tours for the first decade, said he stopped offering his studio as a tour stop when he and his wife, Jan, opened a retail store in Nashville, and turned his home studio into primarily a workshop.

He said the tour was initially Jan’s idea.

She said they had lived in southern Brown County for about a year and met artists who worked and lived in rural areas of the county. She thought the tour would be fun for both artists and visitors. Nashville business owners Ellen Carter and Andy Rogers both provided support for the early tours, she said.

Larry decided to participate as a visiting artist this year because of the 20th anniversary.