photo and story by Chrissy Alspaugh

For nearly a decade after the Little Nashville Opry burned, many believed the days of a music venue drawing thousands of visitors to Brown County were through.

But with the heart of a musician, skills of an architect, and relentless optimism in a dream for his hometown, Doug Harden never gave up.
It’s still a bit surreal to the 61-year-old mandolin player that construction has begun for the new Maple Leaf Performing Arts Center, a 2,000-seat indoor entertainment venue in Nashville that will feature a variety of national music acts representing all genres of music. The community broke ground this summer for the project that is projected to open in July 2019.

“For years, we were just doing what we thought was right, seeing how far we could push this idea,” he said. “It’s pretty incredible to finally get to dream about opening night.”

During all those years of planning and hunting for project financing, Harden said he just couldn’t stand watching the missed opportunity and economic impact of tourists choosing to vacation elsewhere and local youth moving away.

The devastating Opry fire on Sept. 19, 2009, which later was determined to be caused by arson, ended a nearly 35-year run of country, gospel and bluegrass concerts at the Brown County landmark. Legends such as George Jones and Johnny Cash, as well as current country stars such as Blake Shelton and Trisha Yearwood wowed packed houses in the unique concert hall.

“The Opry was a huge economic driver and cemented Nashville as a tourist destination. We lost that. As a young kid, I learned if there’s a problem, you fix it,” said Harden, whose father worked as the Bartholomew County Highway Engineer from the 1950s to 1970s. “You think about how to make things better for everybody.”

Harden, who has been an architectural designer in Nashville since 1981, whipped up drawings for a new concert hall within a month after the blaze. 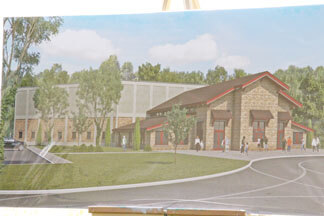 “I don’t know how many hundreds of times I proposed bringing back the Opry, to anybody who would listen to me,” he said with a laugh. “I just want there to be a future here, and I felt desperate that we needed to replace it.”

The key to pushing the project from dream to reality was the idea of financially backing the building with Brown County’s innkeeper’s tax, a five percent charge on overnight stays. The tax’s revenue currently supports marketing for the Brown County Convention and Visitors Bureau. 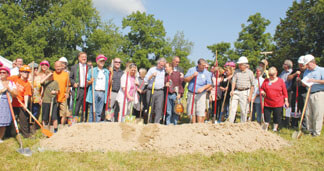 Harden said organizers are optimistic that the nonprofit venue will be financially self-sustaining within its first few years, with ticket sales fully funding the loans for the $12.5 million county-owned building. The venue’s team based financial projections on the Opry’s worst year of sales. “And the math still works,” Harden said.
Any profits from the Maple Leaf, he said, will go to the Brown County Community Foundation, which awards grants and scholarships to local individuals and organizations.

Harden was as skeptical as anyone about whether a venue similar to the Opry could financially survive in the music industry that’s evolved over the past few decades. With a recording studio in the basement of his Brown County home, he knows all too well that consumers no longer pay to own music. The music industry is, however, seeing growth in concert revenue.

To maximize ticket sales, Harden helped seek out the best agencies in the business to work with. Maple Leaf organizers are finalizing a contract with events promoter Live Nation Entertainment that calls for Live Nation to book half of the venue’s shows and its director to book the other half. The Maple Leaf’s team also is in the final stages of hiring a director, Harden said.

He called the Opry’s business model “genius” and said the Maple Leaf likely will target a similar level of musical talent. Decades ago, he watched bands at the Opry including the Nitty Gritty Dirt Band, Chely Wright, and even George Strait. Harden said while up-and-coming and past-their-peak bands might not be able to fill a stadium, they certainly can draw enough fans to fill the Maple Leaf. Some of his dream bands to see at the new hall include The Doobie Brothers, John Mellencamp, and Alison Krauss.

All those bands today include musicians Harden has played with at some point in his bluegrass career. He recorded and toured with six bands over three decades and picked strings on hundreds of stages throughout the U.S. and Canada, including at the Grand Ole Opry and the Library of Congress’ Coolidge Auditorium. For about five years, he toured more than 40 weekends per year.

Harden’s experience as a touring musician and architectural designer uniquely qualified him to design the new concert hall for Brown County. The two-story structure will boast an inviting wooden entry hall, breathtaking views of 100 acres of Brown County hills, and top-notch lighting, sound, and visual sight lines between every seat and the stage, Harden said.

It’s Harden’s best attempt to give back to his hometown.
“It just makes me glad to think we’re giving a direction for Nashville,” he said. “And for other developers, who I truly believe will come.”