Jim Roberts
and his Trains

People love Brown County for its surprises. On your first visit or your hundredth, you’ll find unexpected history, culture, and beauty in the corners of our towns, around the bends of our country roads, and deep in the forests of our parks. And some of our surprises aren’t found on tours or in guidebooks at all, but are hidden deep in the mosaic of the everyday life of our community.

Take Jim Roberts, for example. Most local folks know Jim as a lawyer. For over 50 years he’s served Brown County in a number of roles, including county prosecutor, public defender, and currently as Nashville’s town attorney. In private practice, he’s also drawn up contracts, represented people in civil cases, and helped them with divorces and wills. When it comes to the law, you could say Jim’s tracks are all over the community.

But outside of the courtroom, Jim can be found making tracks of a different kind—in the scaled-down replicas of the local railroad he’s laid out in the basement of his home north of Nashville. And though his two passions in life may seem unrelated on the surface, for Jim both his law career and his interest in model railroading are rooted in his deep connection to Brown County.

Jim fell in love with trains at an early age. “An older cousin of mine showed me his toy trains when I was about two, and after that you couldn’t keep me away from them,” he laughs. He got his own train set at six years old, and since then he’s spent a good deal of time and money on his trains, first as a typical hobbyist and then as a serious collector.

Jim says his fondest memories of growing up in Brown County were his days in a one-room schoolhouse in Helmsburg. Of course, that experience also included trains—Jim’s schoolyard allowed for a “beautiful view” of the engines and cars stopping in town every day just across State Route 45, which only fed his obsession more. By the time he grew up, he was making lists of the locomotives his collection lacked in his law classes. “Maybe my hobby made me a little weird,” Jim admits, though I detect no trace of regret in his voice.

Fast-forward to today, when Jim’s got a long career under his belt and an amazing room full of trains under his home in the woods. Their basement, his wife Carol explains, was dug especially to give the couple space to work at their respective hobbies. “But pretty soon, my ceramics studio was about eight inches wide,” she chuckles. Now the basement is either shelving for Jim’s model trains or floor space for his customized layout, which he calls the Indianapolis Southern district of the Illinois Central Railroad. 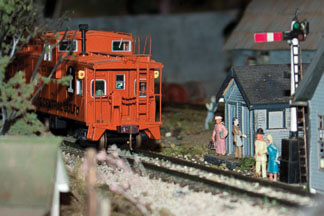 Not just a random collection of scenery, Jim’s layout reflects the 1950s Brown County he knew, sometimes in painstaking detail. Using photos as reference, he recreates the look and feel of the trains and buildings of the era, even down to the signs and vehicles on the streets of the tiny towns. “The itch this scratches for me is nostalgia,” he tells me. “I try to make everything as accurately as I can to the time period.” Along with the town of Helmsburg he remembers as a boy, Jim’s layout also features the orchards near Fruitdale, a limestone mountain, and the Shuffle Creek Trestle which he calls a local marvel of engineering. His trains even feature recordings of their engines and whistles that sound as they run across the track.

As with many hobbies—and the law, for that matter—model railroading is far less straightforward than it seems to outsiders, and there are spirited arguments among its different schools of thought. Some have to do with the size of model or “scale” one collects (Jim’s a “lifelong S-scaler,” for the record); some concern the materials a train’s made of; some involve the height of the track itself. Turning one model engine over in his hand to show me, Jim says even the shape of the flange on the wheels is contentious for some purists.
Jim’s got definite positions staked out on each of these issues, but make no mistake: he has a lot of fun with his trains, and lends his own sense of humor to his layout. He points with a smile to three tiny figures meeting on the street in Helmsburg: “That’s Abraham Lincoln, Santa Claus, and a floozy,” he says. (I’d challenge Jim’s sense of history, but I know better than to argue with a lawyer.)

On your next visit to Brown County, remember that a community is more than a place—it’s also the character and spirit of its people. Surprises like Jim Roberts are some of the best attractions we have to offer—who will you discover here?